What a glorious thing, this porcelain contraption!

By Kevin Wright April 02, 2015
It's finally in!  It's amazing, although not on the scale of a double rainbow or manned space flight, but on the scale of the day to day we couldn't be happier.  Many of you know that we've had some plumbing issues on Cygnet since we got her last May and it's been a challenge.  We've even had a couple weeks of "bucket" usage.  Yes it was terrible, but that's not going to be an issue anymore.

At the beginning of our season last year we had one toilet that worked just OK and another that didn't really work at all.  We did some maintenance and got both working temporarily but that lasted only a brief time until one day while we had friends aboard the rear head stopped working normally.  It simply wouldn't flush the waste out of the bowl at a rate faster than the new water coming in.  We decided that the front toilet would have to be our first choice in waste elimination.  Well that worked until we realized that the waste line had a hole in it and that waste was just pouring into the bilge.  That is also a very gross thing and something we needed to fix right away.  We spent a lot of time and effort trying to replace the hose but it simply came to the fact that we were not capable of budging the hose through the super tight space that Carver had designed for it.  Not only that, we didn't know how we'd get the new hose in.  We relented and asked Chicago Yacht Yard to do the job, see our previous post about this HERE.  It wasn't cheap or easy but they put a new hose from the toilet to the waste tank.

Meanwhile we had moved the working toilet from the front to the working hose in the back.  We had one working head and didn't really have much of a problem.  Kevin was able to replace and upgrade the waste line for that toilet and everything was going well.  It leaked a tiny bit occasionally (mostly fresh water) but we kept up with it and it has continued working.  We bought a Portable Toilet for guests and things were OK.  As the winter dragged on we planned to get a new toilet installed before the boating season and made sure it was one sized large enough for an adult to use. The one working toilet we had was the size of a donut.  So here she is, our brand spanking new Thetford Tecma Easy Fit Premium Plus. 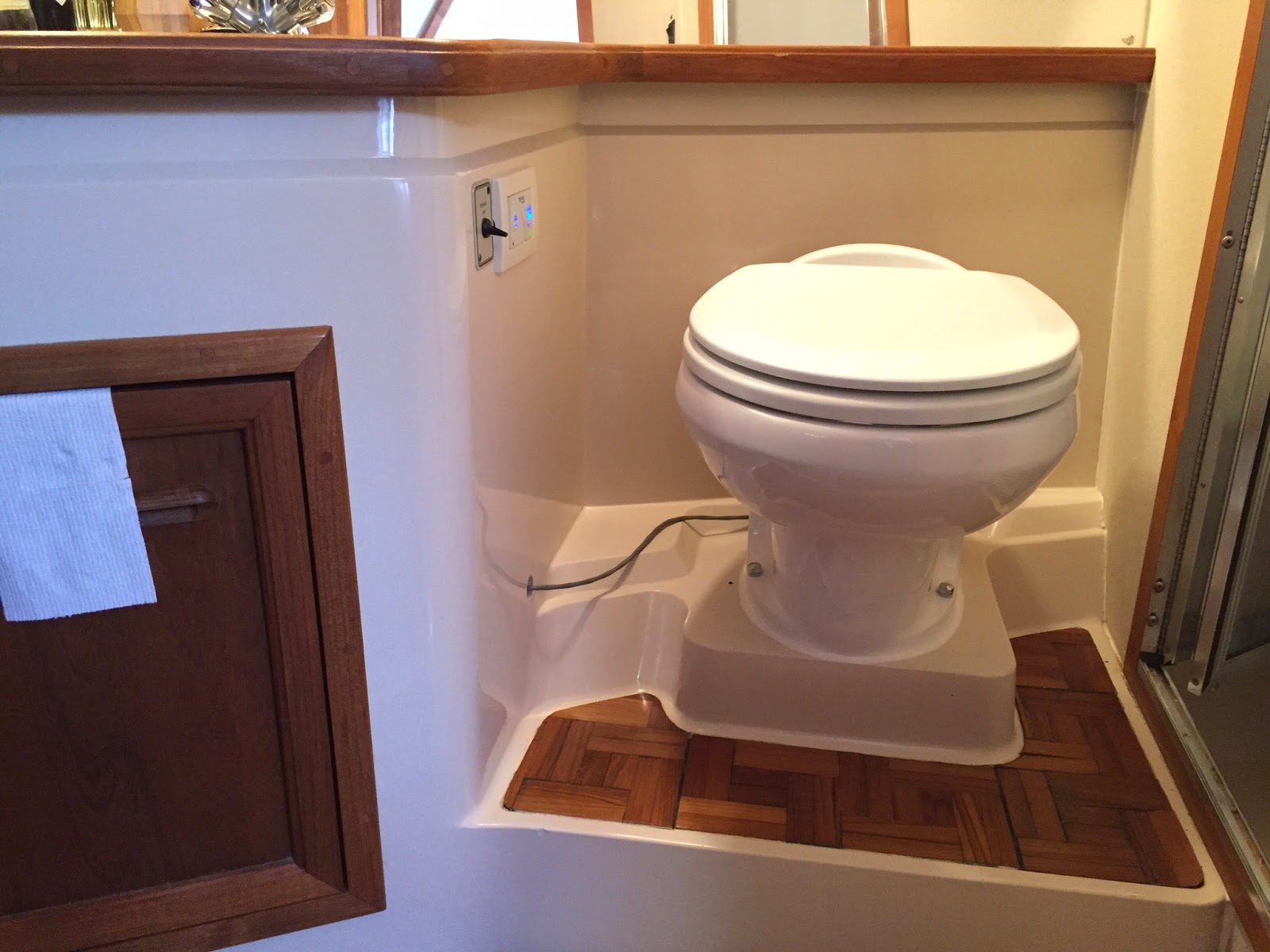 Well maybe it isn't the sexiest toilet in the world but it works and it's comfortable.  It's a serious upgrade from our old Crown Heads since you can add water without flushing, it has a double flush, a tank level sensor, lighted smart touchpad with level display, and a very comfortable bowl.  It's compact and modern looking and we love it.  It wasn't easy to install however.

We started with this, a pedestal, some wires, a fresh water tube, and a waste tube.  We measured, cut, measured, fitted and caulked and it is now fully operational.  We had to fit an additional pump for the water intake and run a series of wires through the bowels of the boat.  None of this was easy, and since we broke the seacock that stops the water from coming into the fresh water line from under the boat we had some difficulties there too.  The toilet uses the water around the boat to flush and the valve to close it broke in the open position so we had to come up with a solution to the water breaching our hull.  Here's what we did, a Glad Zipper bag and a clamp kept it dry enough for the install.

You can also see some of the new wiring that needed to be run, there were six wires in all- two each for the mid-level and full-level sensors and two for the new pump.  Kevin decided to make this install as good as he could so he actually purchased the right color wires and made sure anyone who has to work on this in the future can figure it out. 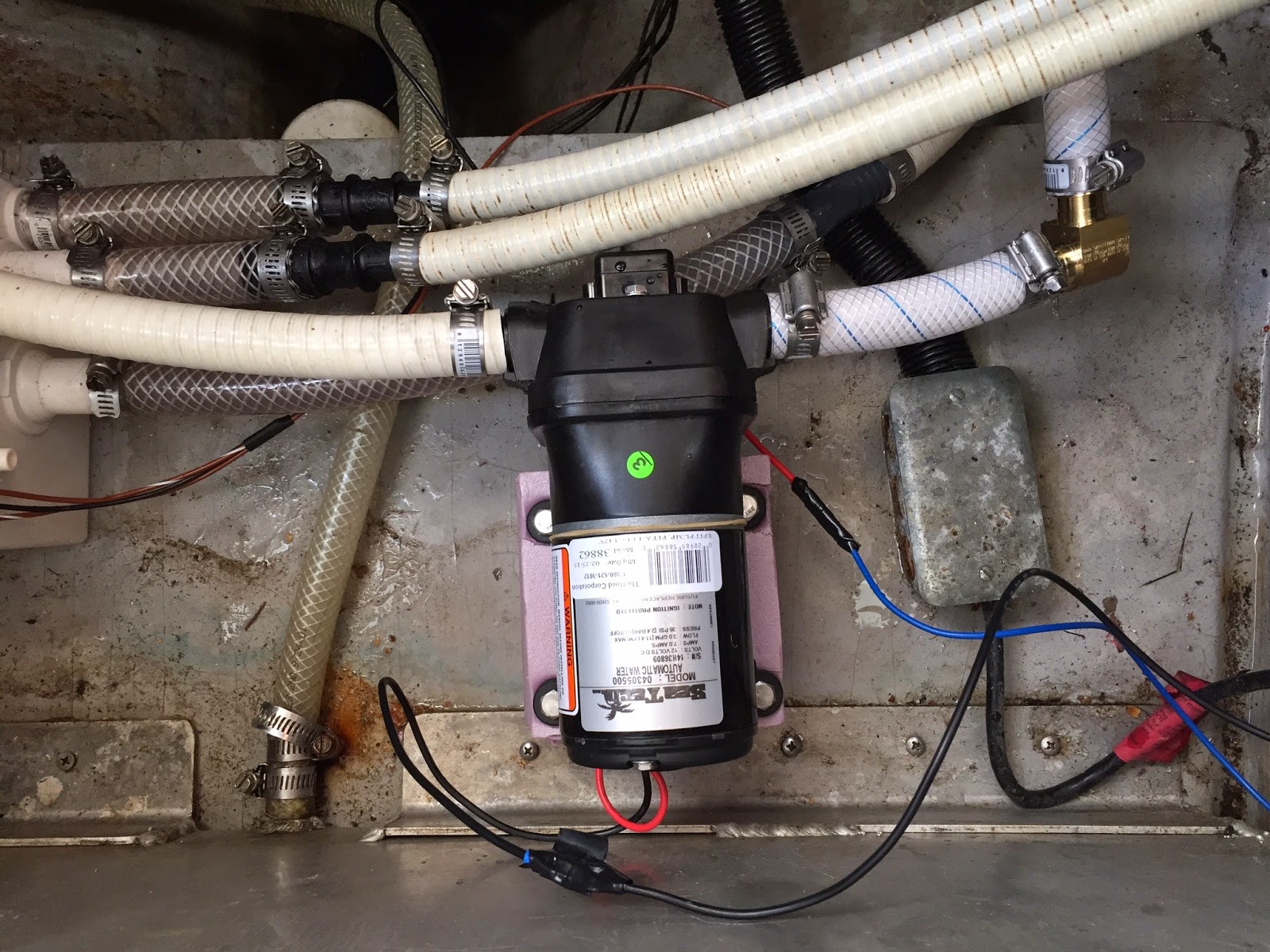 Unfortunately the elbows we needed for the hoses just are not easy to find since the hoses on Cygnet all seem to be some crazy size that doesn't fit anything commercially available.  We found these brass elbows at Menards and they mostly work.  The hoses don't fully seat on them, but they don't leak and they aren't sliding off.  Fortunately the old hose did fit on the pump outlet so no "fix" was required.  We both worked to get this thing in.  Kevin had to cut the fiberglass where the switch mounts with a small hack saw and only had about 3/4 inch clearance since there is a piece of wood behind the fiberglass.  If anyone from Dremel or Rotozip is reading we'll accept free stuff in exchange for some really nice words on this site, see last weeks post!  Kevin ran the wires and mounted the full-level sensor and is still considering whether or not the optional mid-level sensor ($110!!) is worth adding.

Colette helped with the pump routing, drilling and mounting, and setting the toilet in place as well as hooking up the wiring.  If it were a perfect world Kevin would like the touch pad wiring to be routed behind the fiberglass to the bowl and not coming out the side like you can see in the photo, but there is no access to get the wires back there so it is what it is.

We've tested this thing fully and are happy to report that it works great!  So water we thinking about our latest project.  It's the #1 thing we have done to the improve our life aboard, also #2.  Seriously though, it's great to have a second toilet that is comfortable and WORKS!