By Kevin Wright April 20, 2015
We've been on WGN TV twice (Original and Followup links) and Your Chicago Podcast and now this Saturday we'll be on the Outside the Loop program with Mike Stephen on WGN Radio!  We don't see this attention as any sort of reflection on us, but more the situation.  People seem to be in two camps about us (and the others in the marina) living aboard a boat year round in Chicago.  Either you think we are just crazy and can't understand it, or you love it.  Our one year anniversary of living aboard is fast approaching and as the weather heats up it's becoming clear as to why we are doing this.  It's just awesome!  Yes it sucked for two months in the winter but that's over, at least for the next nine months, and it's been great living on the water in this mild spring we've had in Chicago.

We are still in the process of getting the stereo and entertainment system up and running.  We've been talking about it for a while but it's just taken longer than we thought.  We are relying on a professional to do the work so we are at the mercy of their schedule.  Here is a teaser photo. 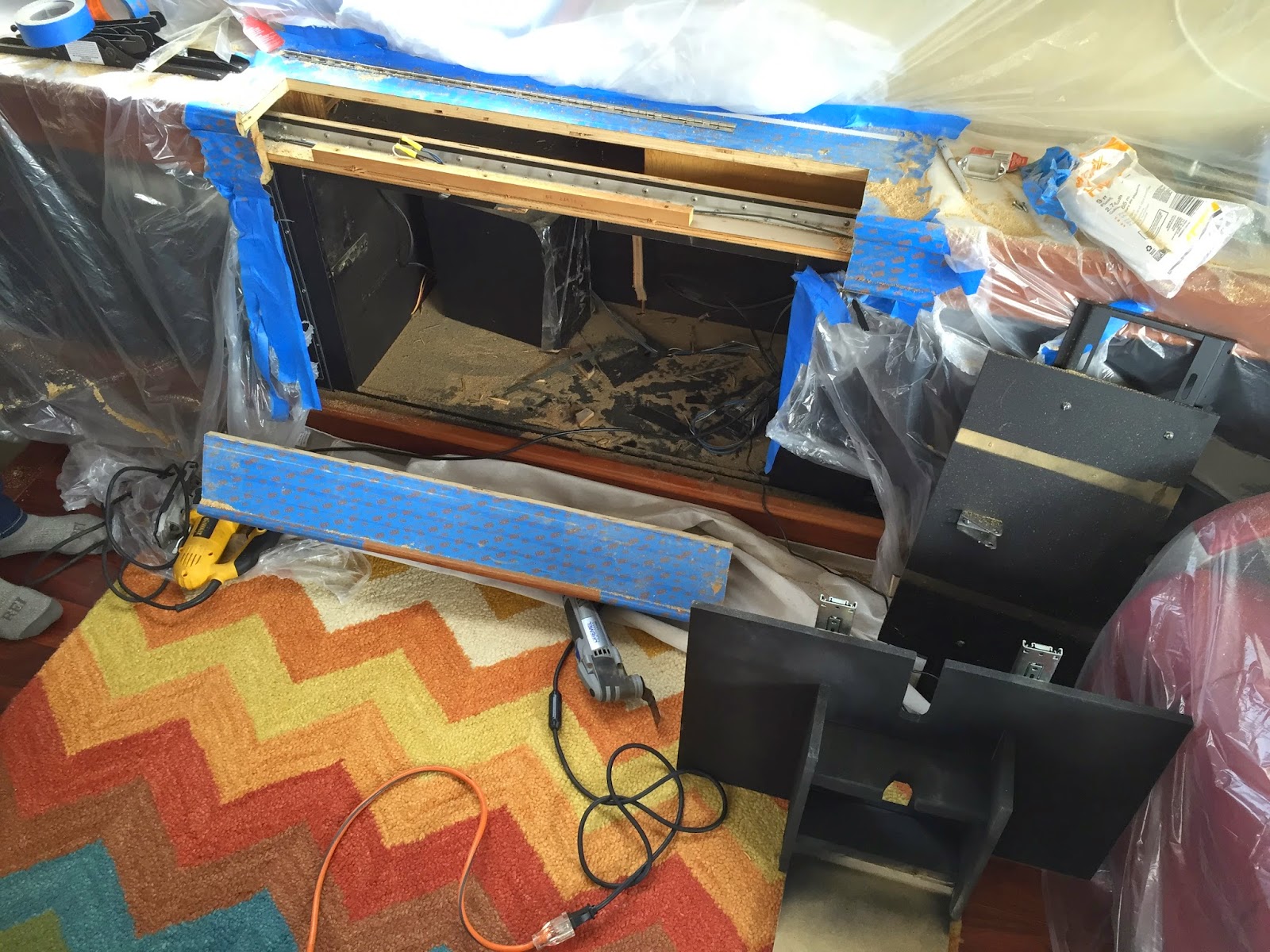 We also started some work to move the bar from inside to outside.  Kevin still has to manufacture and replace the doors but the inside is nearly done.  There are still some boating essentials inside that need to stay and some other things that will be moved out but it's getting there.  Colette found the red quilted fabric and we used spray glue to stick it to the fiberglass and wood panel interior.  We have a black cushioned Contact drawer liner on the bottom and mounted three LED lights inside for nighttime visibility.  We think it looks a lot better than before.

We also had Manny's crew come out and polish the hull below the rub-rail.  They did an excellent job and if you are looking for a great crew to do polishing or other similar work contact us and we can pass on their info.  They also wrapped the boat in the fall and did a great job at that too.  We highly recommend these guys.  Because the cost to do the entire boat was more than we wanted to spend, Kevin needs to break out his old auto detailer skills from college and get the topside just as shiny as the bottom.  The next two weekends are not going to allow it but maybe some nice evenings during the week.

The new West Marine is opening soon which we are excited about.  It's significantly larger than the old one on North Ave. and will be a shipping hub so they should have a lot of stock.  We've been asked to be part of the celebration and the Cruising for a Cause opening celebration.  Kevin will be teaching his first Motorcycle Safety Foundation class for the year so Colette hopes to go April 23 or over the opening weekend for the celebrations.  If you are near Chicago the store is at 1160 N Halsted St.  Our hope is that they will be able to build a dock since it's on the Chicago River and we can boat there to do some shopping.

So water we thinking about the continued attention to our living situation?  It's fun, and soon all the attention will die down and people won't really care that much again.  We have heard from a lot of you about how inspirational it is and how you wish you could do the same thing.  Just know that we are regular people too and if doing something different than most of society appeals to you just go do it.  We've talked to people who raised kids aboard, or sailed the Great Loop.  Maybe a boat isn't your thing, get a Yurt or convert an old water tower.  Do something fun and a little silly and you'll see how great it is to have that something special in your life that people really respond to.  Good luck!