By Kevin Wright May 22, 2014
It's been five days and four nights and we are so far enjoying it.  Our trip to River City was a challenging and exciting one! On Saturday morning Kevin's mother Beverly and her boyfriend Don joined us at the boatyard to bring Cygnet home.  We had decent weather, mostly cloudy and cool but calm.  We were thankful it wasn't a horrid windy and stormy day.  With a few things we needed to get through the coming week and the four of us on board we started her up and prepared to set off.  Kevin has never piloted a twin engine boat before and was a bit nervous.  He's a good driver and knows how to handle a smaller vessel, but this was much larger than anything he's had on the water.  He's a quick study and watched the previous owner when we went on the sea trial and talked to some experienced captains about handling a big twin like this.  Plus Don was there, a seasoned fisherman who has owned many boats (Including Two Wrights) and fished from many more. 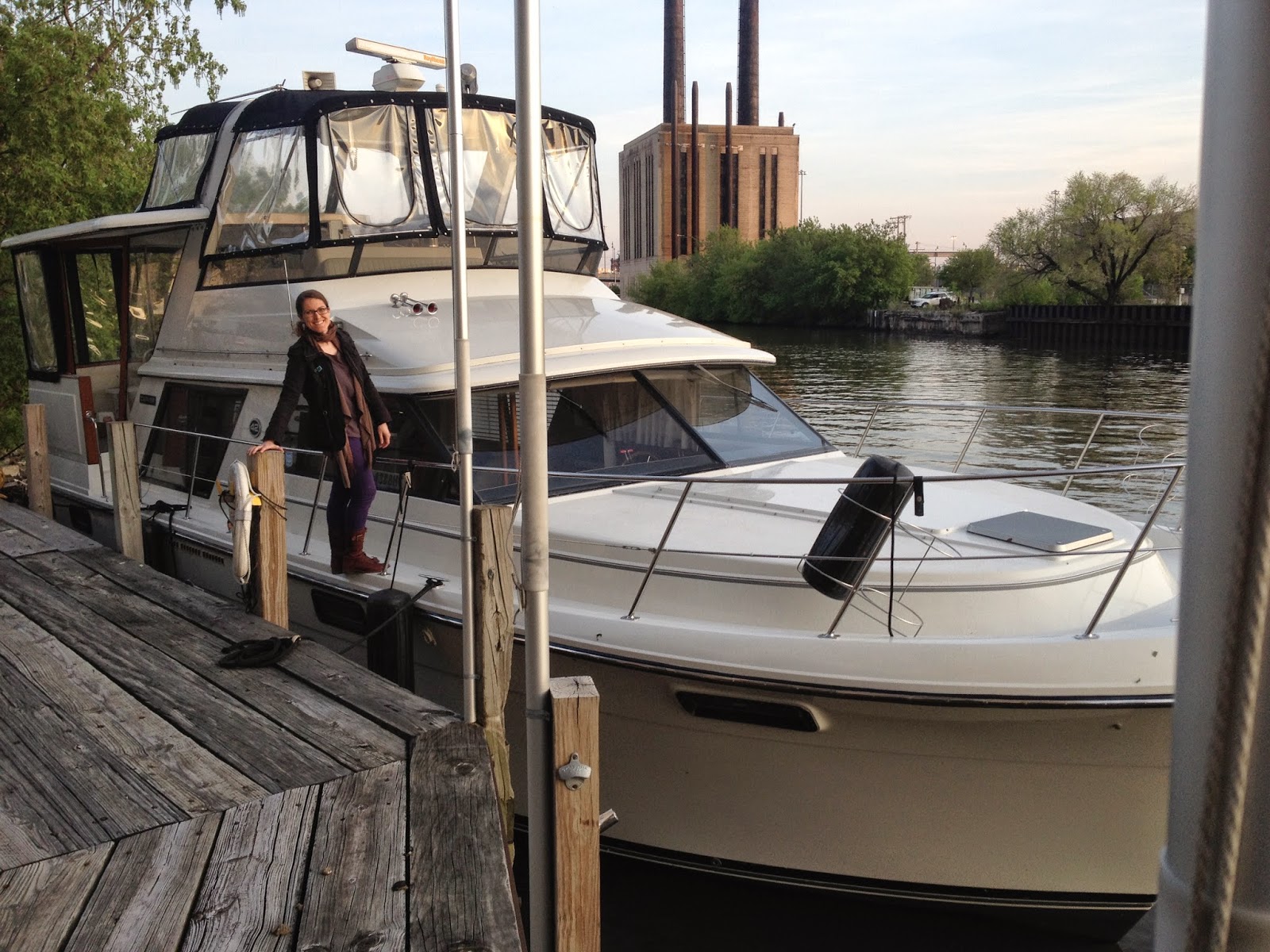 We started up the Calumet River toward the lake.  It was a bit of a stressful experience getting out of the boatyard as the water depth there is known to be very shallow.  We kept it straight in the middle and had no problems.  Kevin soon realized that the port engine throttle was sticky between idle and about 2000 RPM.  Add that to a low idle problem we found on the Sea Trial and it was a bit tricky to get Cygnet to obey at first.  We slowly made it down the river and found ourselves at the O'Brien Lock which we had been told can take a long time.  We waited for over an hour and finally it was our turn to go through.  Unlike the Chicago Lock, you don't need to tie up in the O'Brien Lock so we thought we'd just ride it out, but the wind had other plans.  Colette, Bev, and Don all took great care keeping Cygnet from depositing fiberglass on the dam wall while Kevin shouted orders from the bridge.  Most went ignored.

After we made it through the lock it was the bridges that were the problem.  Thankfully, the Calumet River bridge masters are on the ball and when we realized we wouldn't make it under a couple of them we had the bridges raised for us.  We found a few other boats waiting for a railroad bridge near the mouth of the river and formed a flotilla to the lake.  In all, four bridges had to be raised to get Cygnet out to the open water.  We felt bad for the folks on the roads that had to wait for us, but it was also kind of empowering. 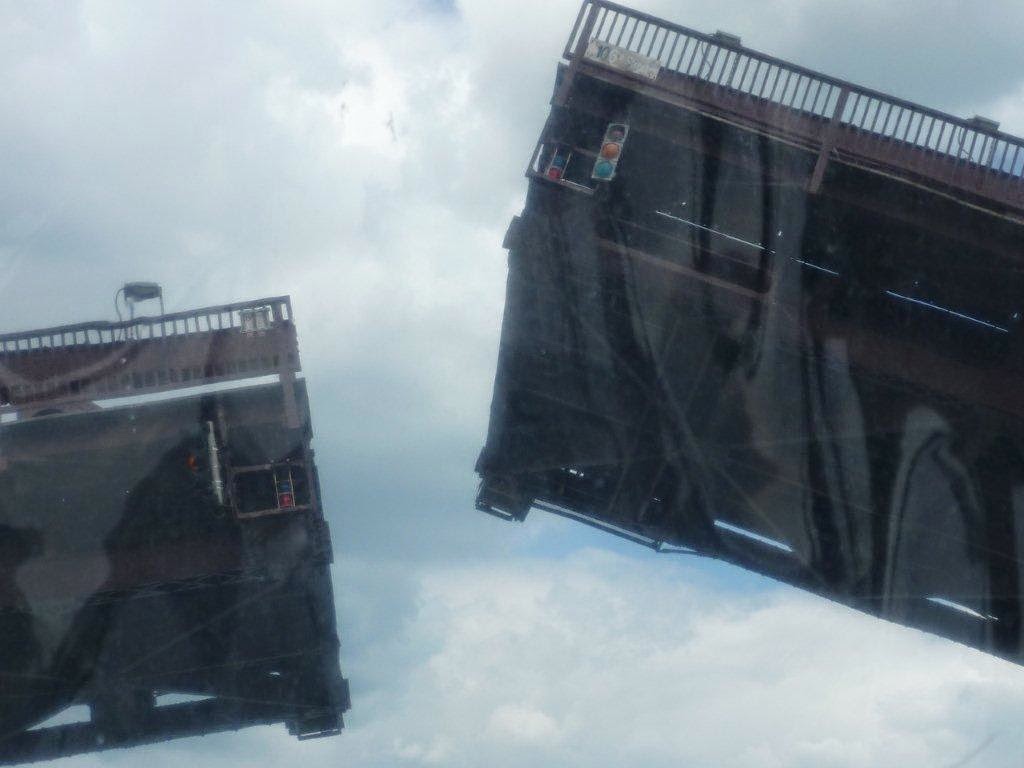 Now it was time for fuel.  We were fortunate to get a half full tank when we picked her up, but knowing we had a long summer and some questionable bridges in the Loop we wanted to fill her up to get her sitting as low as possible.  With fuel weighing 8 pounds per gallon we figured we'd gain an inch or more clearance under the Michigan Avenue bridge, the lowest in the Loop.  We shuffled over to the Horseshoe Casino in Hammond, Indiana for fuel since we'd done the research and knew it was $0.80 less per gallon than the fuel on the Calumet River or in the Chicago harbors.  After the fuel stop our wallets were much lighter and Cygnet was a bit heavier and slightly lower.

Then it was a smooth sail straight to Chicago.  Cygnet is a beauty, and she takes waves very well, but she's not a speed demon.  Cruising on a pretty calm day she turns about 3,200 RPM at 12 miles per hour.  Our beloved Two Wrights would cruise in the 18-20 MPH range and top out close to 30.  Cygnet struggles to see 23.  But Cygnet isn't about speed, she is about comfort and pleasure, and the trip up was a breeze.  We locked through at the mouth of the Chicago River and started toward River City about 3PM.  The weather was pleasant, the people were out on the streets in force and everyone had smiles as we floated by.  There was a lot of tour boat traffic and while Two Wrights would just sneak around those wide bodies, Cygnet took her time as Kevin tried to keep her in the center of the channel.  LSD and Columbus bridges were no problem, but then came Michigan Avenue.  Colette jumped up on the hardtop to see what the clearance was like.  Kevin progressed as slowly as he could toward the highest portion of the bridge.

"Abort!  Abort!"  Colette said as we came within a few feet of the bridge.  Engines went to full reverse and Cygnet slowed and began backing.  It didn't look like Cygnet would make it!  We called the bridge master and moved to the side of the river to wait.  Unfortunately the bridges were not going up that day as all the operators were working on fixing a malfunction on the 18th Street bridge.  It seemed we were going to have to make alternate plans.  But we talked about it, and a nice gentleman from Shoreline Cruises piped up and convinced us we could make it.  Kevin removed the top navigation light, the highest point of Cygnet, leaving the expensive radar to act as a bumper.  We decided to give it another try, gaining a few inches without the light, and with Colette as lookout we just squeaked through!  It was a game of inches but we'd won.

The other bridges were also close, Wells Street was maybe the same as Michigan Avenue, but we were able to get her all the way through to River City and tie up in our new residence by 4PM.  After the trip up from Indiana the low idle on the port engine had disappeared too!  We hope that is gone for good.  The slips are being re-done in our marina.  They were supposed to be complete May first, but sometimes things don't go as planned.  For now we are tied to the outer wall, riverside.  It's not a bad spot in actuality, there is a nice tree just off the stern that affords us some privacy and once the tour boats cease about 7PM it's quite calm. 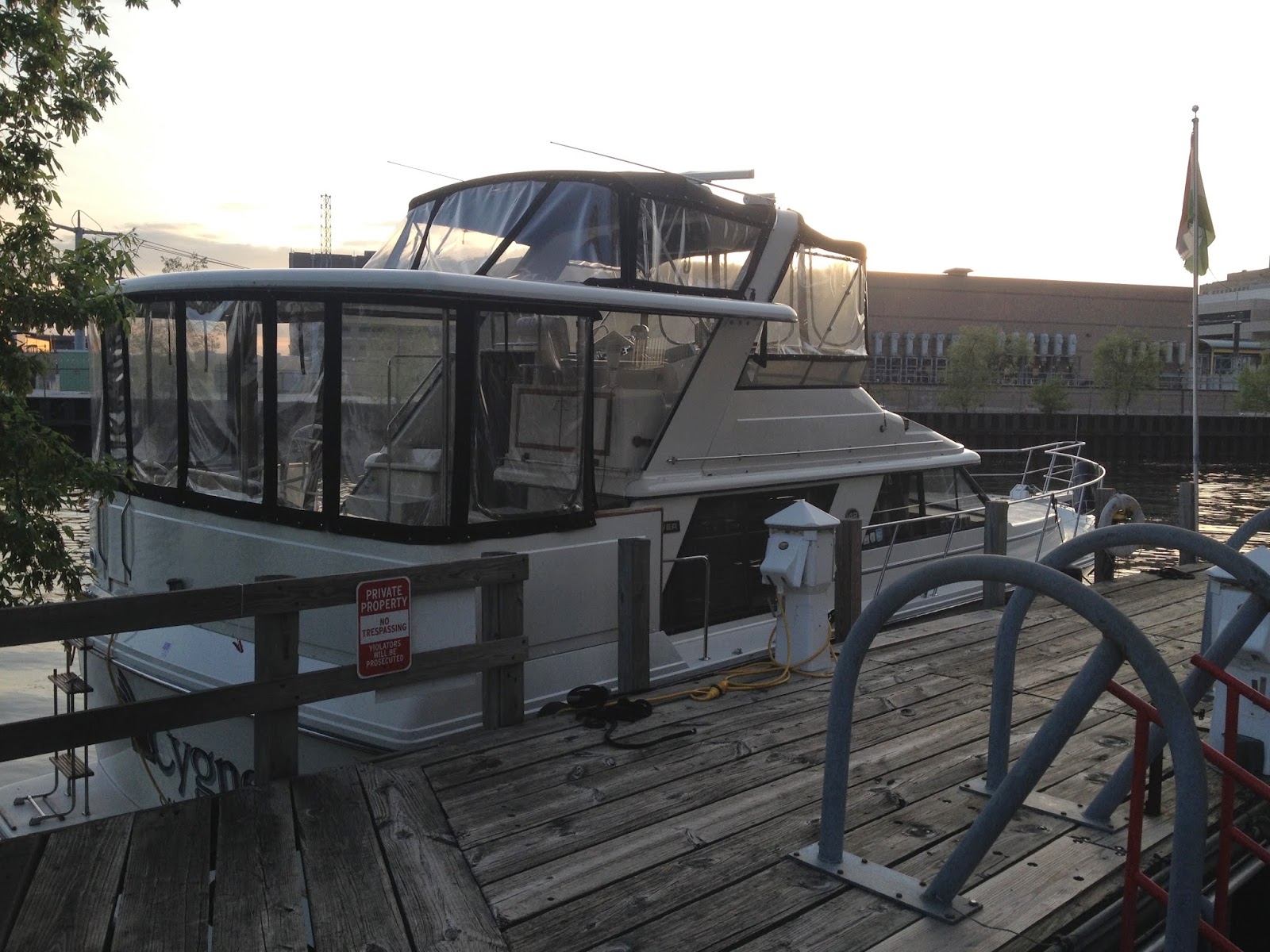 Tuesday night brought a thunderstorm.  The first we experienced.  Normally you get off the water when a storm hits, but when the water is your home you stay aboard.  Colette did a great job of battening the hatches and we had no problems in high winds, lightning, and heavy rain.

Next week we will tell you about our first week occupying such a small space.  We've spent the last four nights aboard and it's been fun, certainly.  We've found some great advantages and disadvantages so far.  We've also uncovered some head scratchers like the shower that refuses to be anything but scalding hot or ice cold, the forward head (front toilet) that won't refill with water, the smell that results from it, and more.

So water we thinking?  We think we had a great maiden voyage and we are excited for many more to come!  Check out some interior photos below! 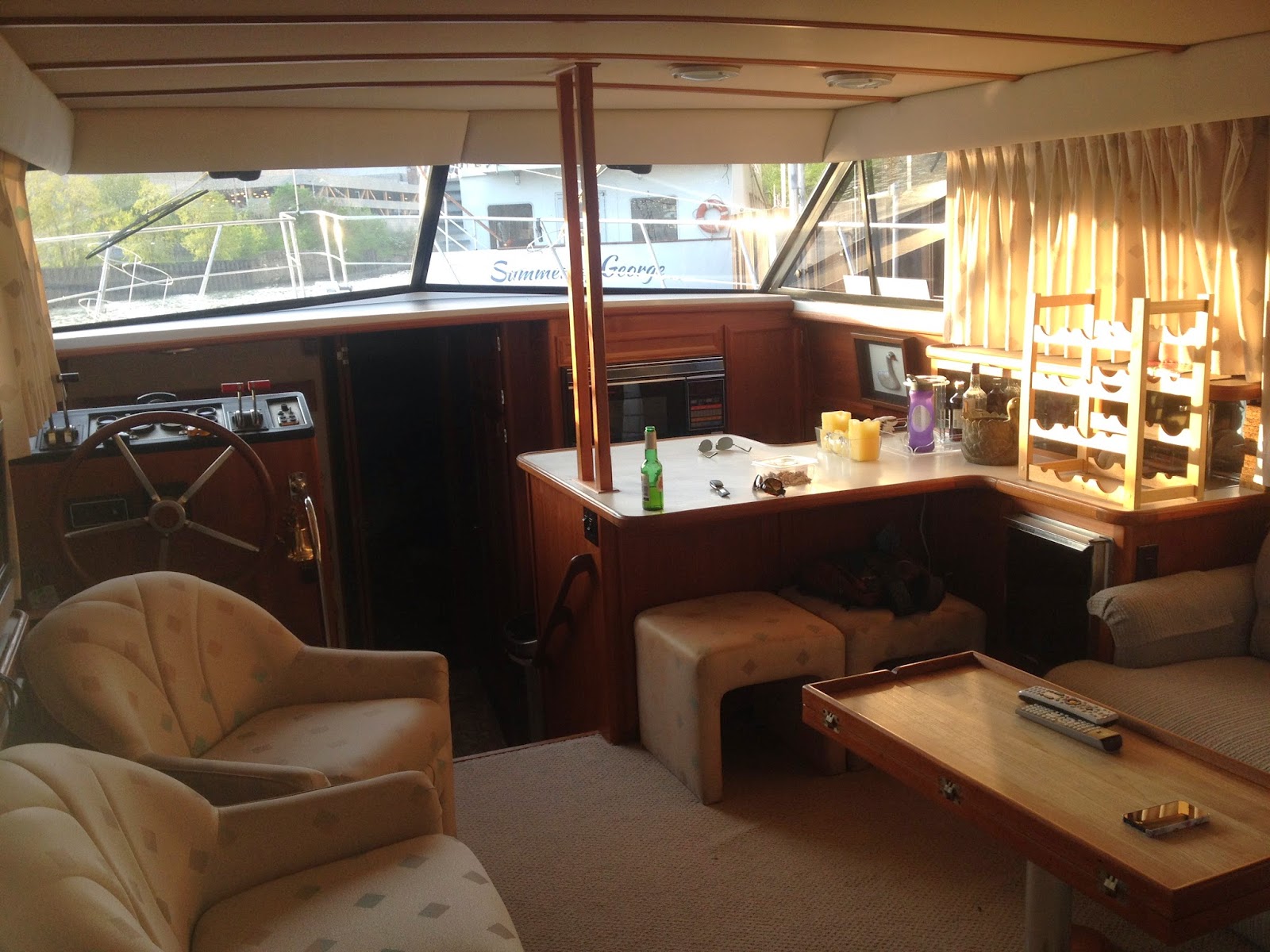 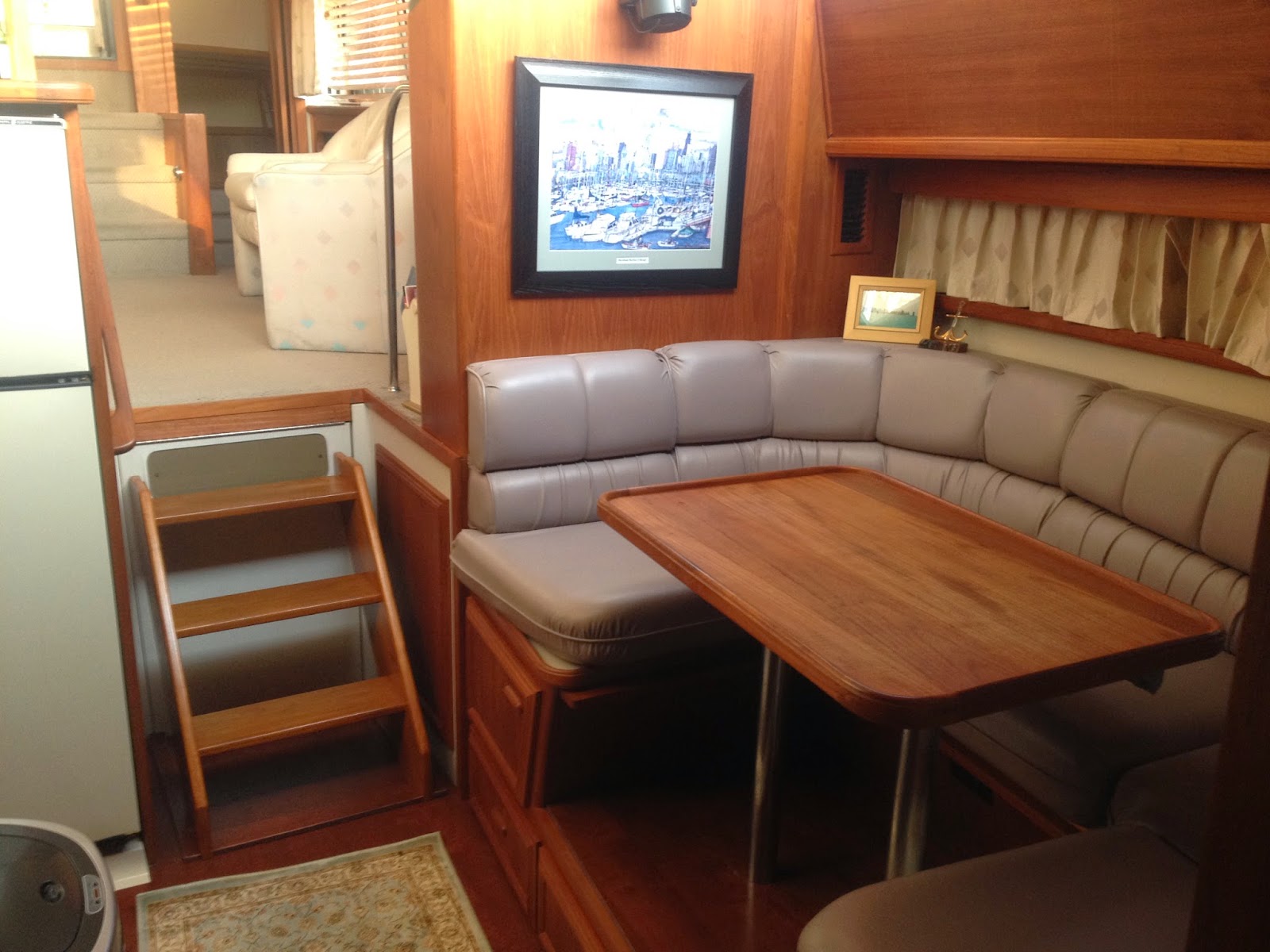 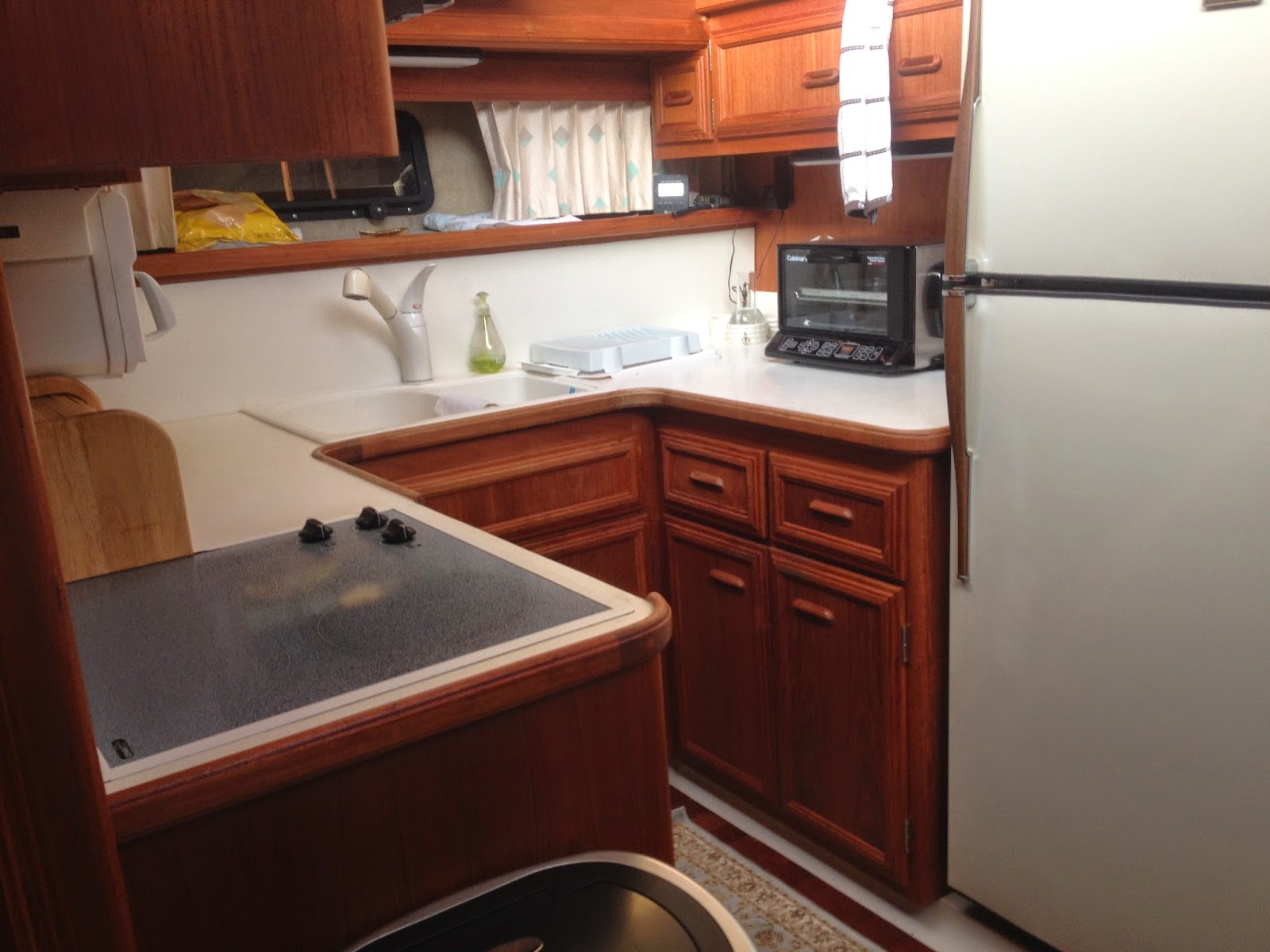 Etienne in the Master Bedroom (Stateroom) 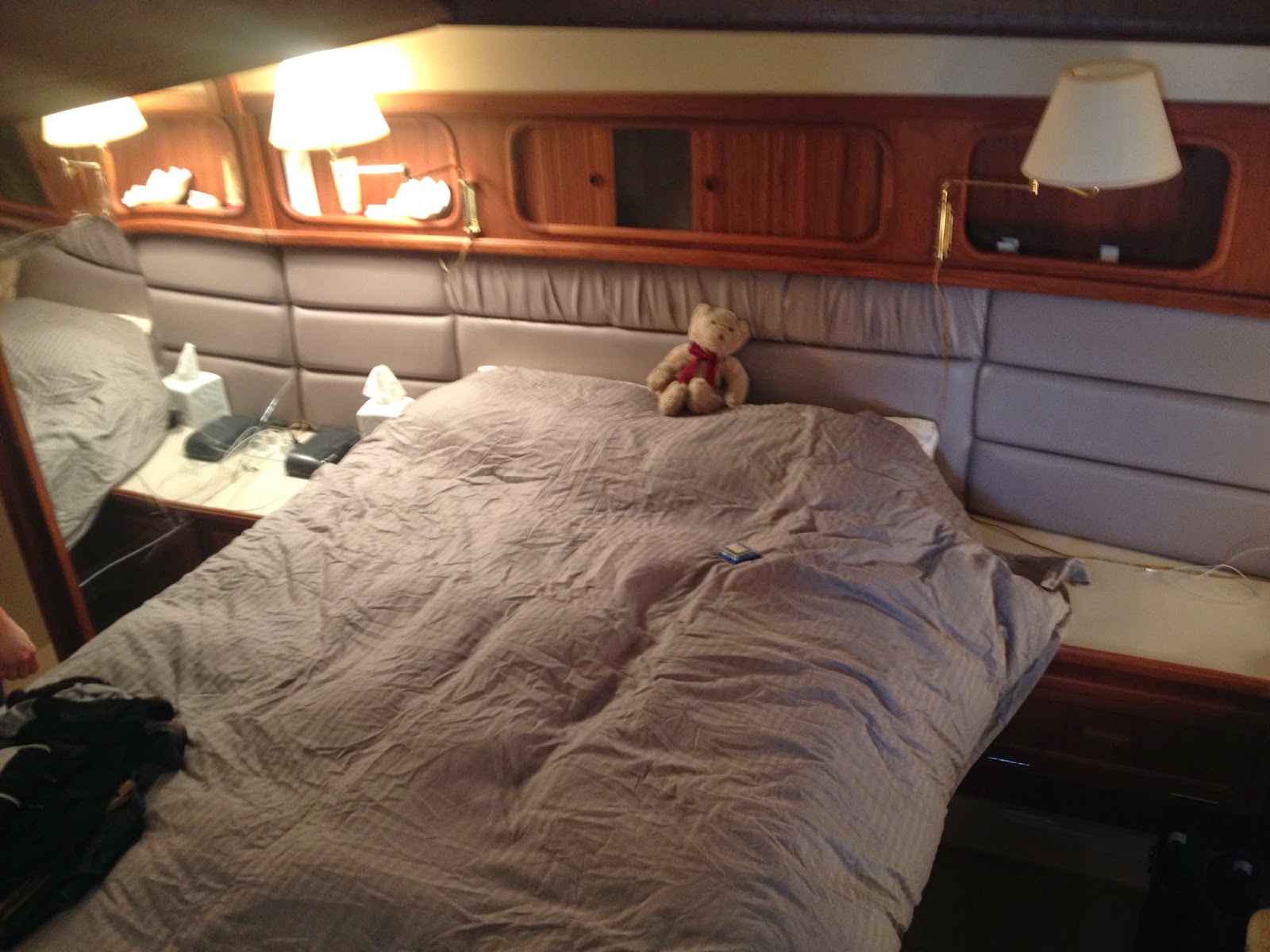