Heating Up and Blown Away

By Kevin Wright March 18, 2015
The weather has broken and we are warming up nicely.  It's been a couple weeks since we had frigid temperatures in Chicago and we've even seen one day in the 70s.  If you're reading this in a warm climate and thinking 70 isn't that warm, let me tell you that after a winter in Chicago 70 is amazing! The sun is heating us up quite nicely during the day and the heaters are keeping us toasty at night. The first day we had over 50 was a sunny one and out of habit we left the heaters on when we went to work.  With the warm sun the wrap acted like a greenhouse and got the unheated rear deck up to 105! The interior of the boat was at 100, which we both agreed was a bit high.

Of course it's a bit early to take the wrap off the boat as the weather has gone back down to more seasonal levels this week.  We shut the heaters off on warm days and leave the zipper door open to the wrap to let in some fresh air.  This has also caused our stereo install guy to lose many pounds of water weight as he works on Kevin's dream stereo system.  More news about that once it's done!


Also this week we had a Pneumonia Front.  Not an Eminence Front, but as the world's best weatherman Tom Skilling said a Pneumonia Front.  It means a bunch of cold arctic air that rapidly swings in behind a warm day at this time of year.  We had 45MPH wind gusts that rocked and moved the boat around like we've never seen before.  Neither of us slept well Monday night as the front hit us.  We heard noises coming from the boat we never heard before as the ropes ground against the cleats, the fiberglass shrank, and poor Cygnet slammed against the fenders holding her off the dock. It was intense, and we are glad it only lasted about 12 hours.  Tuesday night by comparison was dead calm and the water was glass.


The Geese are back!  Last year we arrived at River City in May and the Canada Geese were thick on the small grassy area.  Normally they are docile, noisy certainly, but harmless.  Well we've started to see behaviors from the Geese that a human father would not like to see in his teenage daughter.  They are beginning to get frisky and pair up.  We know that means there will be eggs and eventually goslings (not cygnets) running around the dock adding to the poop minefield that is now River City. The parents get protective of the babies too, so we might have to fight for space like last year.

Next up on the project list is the new toilet!  YAY!  We have been making "do" with one head this winter, and for the entire time we've had Cygnet actually.  The original Raritan Crown Head that we have in the rear continues to be a source of hatred.  We know it was probably the best head made when Carver chose to put two of them in in 1988, but it's really a POS and Kevin is eagerly awaiting a chance to "Office Space" the thing.

The bowl is not sized for adults, the motor is loud as hell, it doesn't flush very well, the thing leaks from a different fitting almost weekly, and the paint flakes off every time you touch it.  Anyway, one is still operational in the rear bathroom and will remain there for a while.  The other one, which never worked for us, is being replaced by a Thetford Tecma Easy Fit Premium Plus.  We had to order the toilet and a kit to make it work with our raw water (outside) system, now we realize we still need more parts to easily fit it into our boat so those are on order.  We are more excited about this than we should be, but we are about to double our holding tank capacity and have a toilet sized for 40 year old Kevin, not 9 year old Kevin.

One more thing we'll mention, since this has been a somewhat boring post, is the management issues. We are on the cusp of having internet at River City as has been promised for months.  We used to have a wifi signal that was good for about 0.5 Mbps.  It was weak and you could only get it if you sat sidesaddle on a donkey while using an authentic Parisian crepe maker, but it was ok to check email occasionally.  We tried to have our own system installed but Comcast, AT&T, and RCN all said no. Now we have a new wifi which was much ballyhooed to be super fast and a strong signal.  Well now we have to put a paperclip in the Donkey's mouth to get the signal and the best speed we recorded was 0.23 Mbps.  Kevin's speed at work is 150 times faster.  Supposedly we will all have our own line run to the slip that we can hook up to our own routers installed this week.  We shall see.  The management company has been more interested in not allowing us to use one of our access gates than get anything else done, like fix the propeller that keeps the garbage out of the marina, allowing scenes like this: 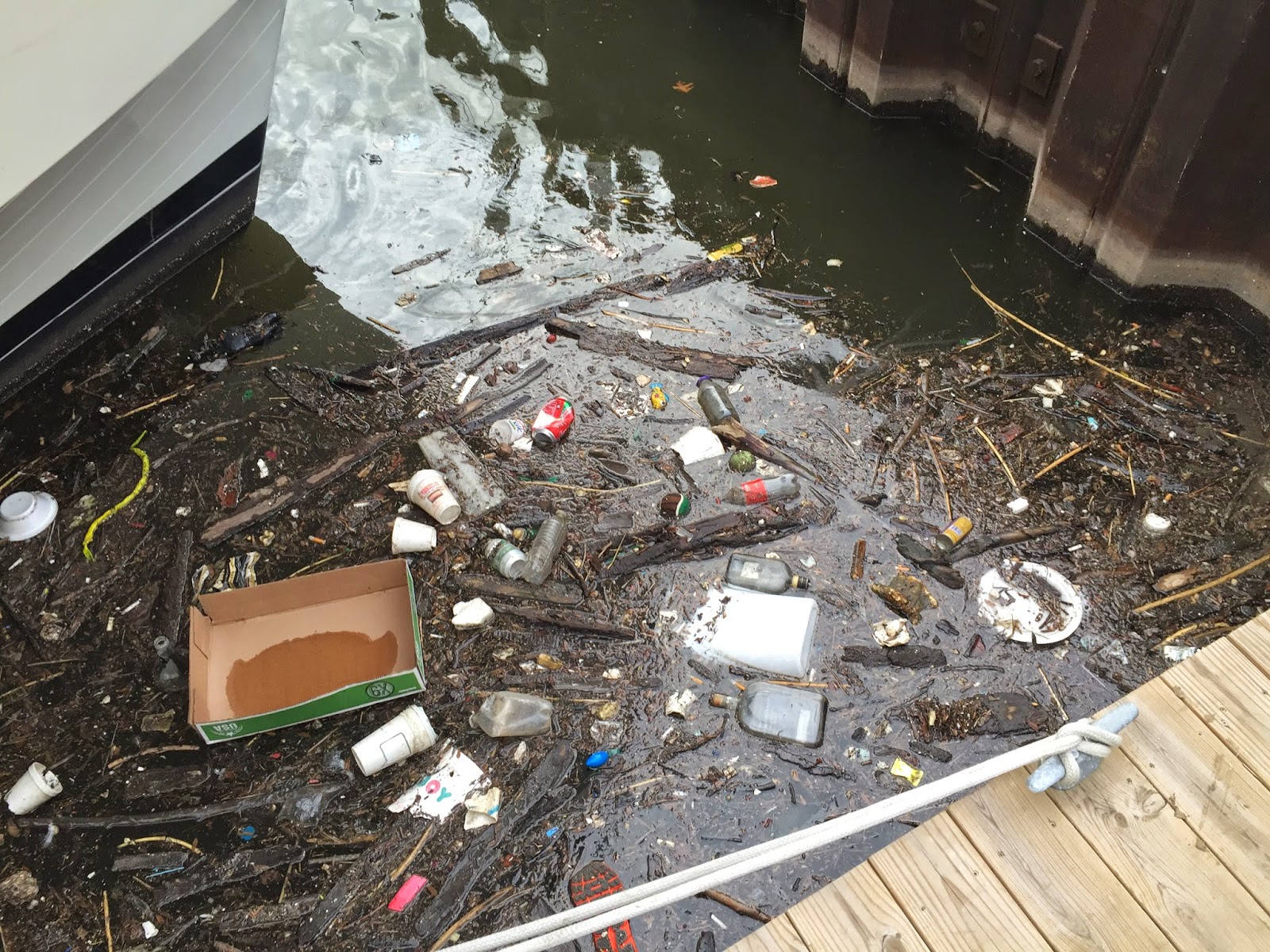 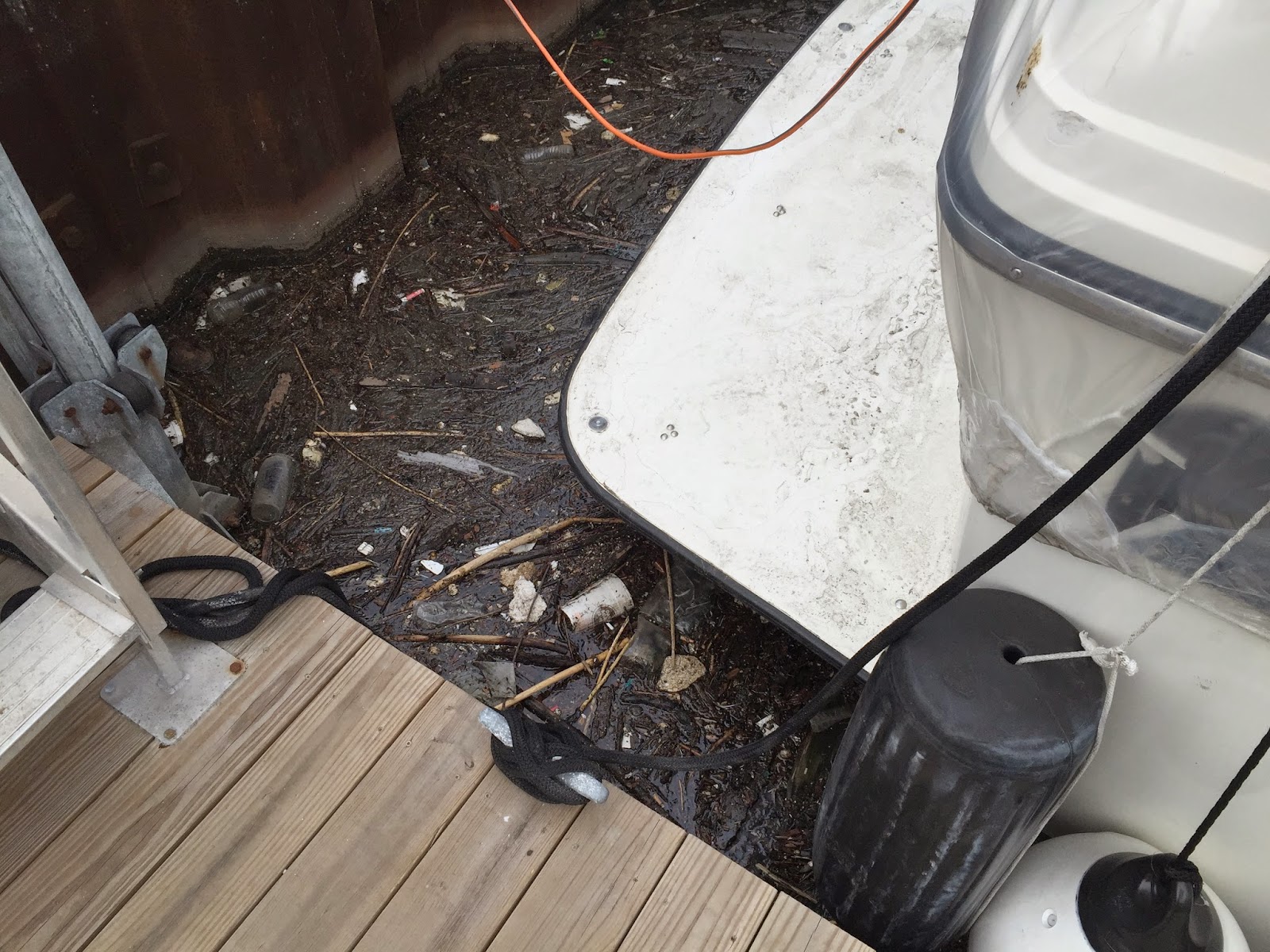 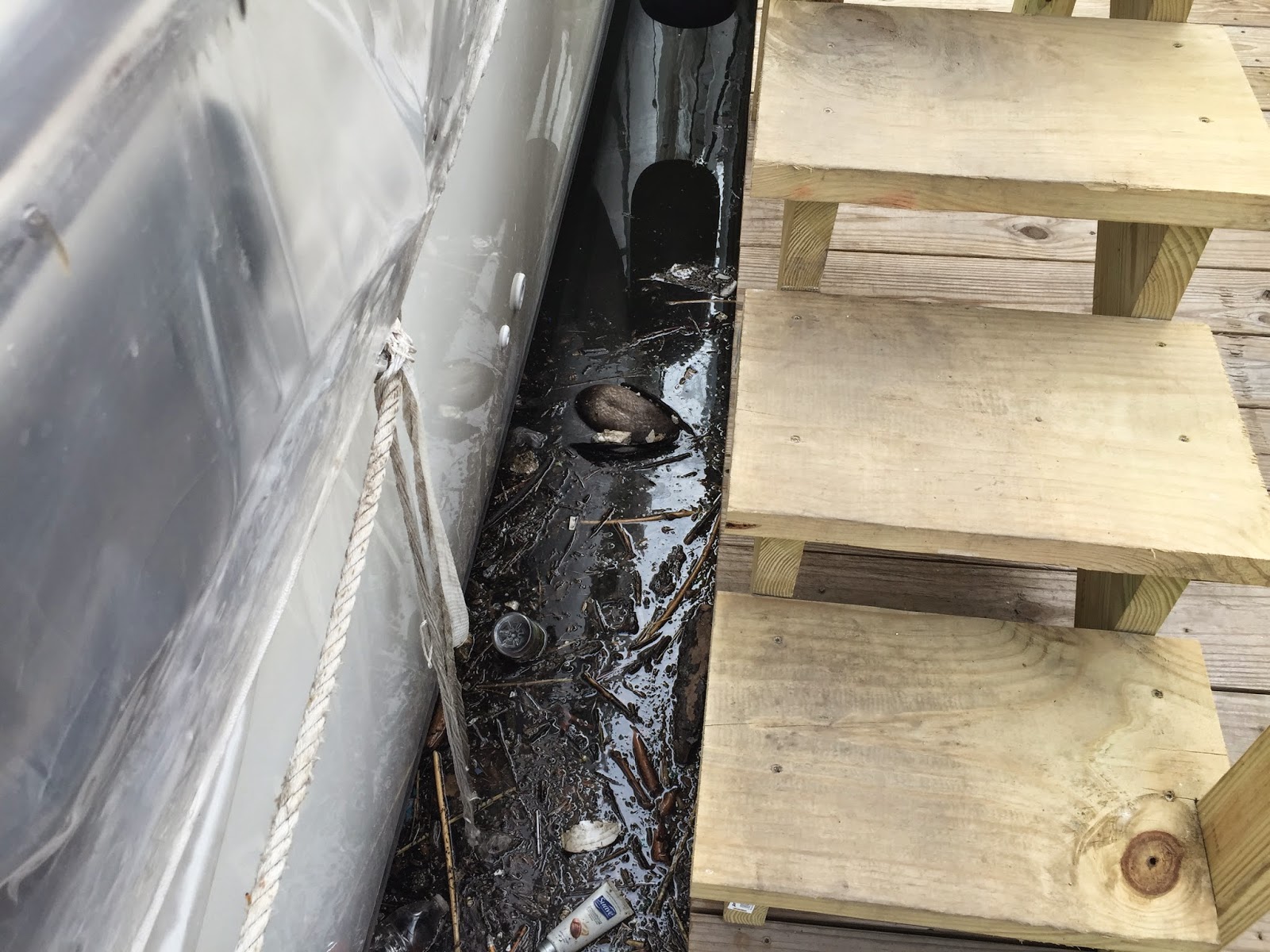 The whole gate issue has us pretty upset, there is an access gate to the parking lot next to our slip which the management company has told us is for "Executive Members Only" and they continually try to keep closed and locked.  Others in the marina agree with us that this is complete bullshit and cut the locks almost as quickly as they are put up.  The management company says it's a safety and security issue but have refused to fix the lock on the main gate that hasn't worked for months, plus the fence was only put up 2 years ago, before then it was completely open.  Then, there is the water issue, which I won't even get into on this blog because I could bitch for days about how they handled that.

So water we thinking about living aboard at this time of year?  With the weather warming up and the sun shining we are very enthusiastic about our upcoming season, we've renewed our lease for the summer at least.  Sure there are still some problems, we still like River City and the location we're in. We are getting fed up with the management company but we've had problems with management companies at apartments too.  Management companies just suck in general, and finding one that wants to manage a small marina in Chicago isn't an easy task.  We are still happy, still excited about this lifestyle we've chosen, and eager to have all of you on the boat this season!