By Kevin Wright August 01, 2014
Thirty-nine days after dropping Cygnet at Chicago Yacht Yard we are back in the water.  Is everything fixed?  Nope, but it's getting there.  We have parts on order for the forward head (toilet) and it turns out the transmission isn't an issue but the oil pan on the starboard side needs a new gasket.  The washing machine is in limbo still but all these things will be repaired by the yacht yard while the boat is in our slip for the same cost as if it were at their shop, no slip call fee.

For now the forward head will have to suffice.  It's not ideal but living with two working toilets is better than one and the forward head being for guests is most important.  Maybe if Kevin lost a little weight the bowl size wouldn't be an issue.

Hey Bro, eat a salad once in a while. 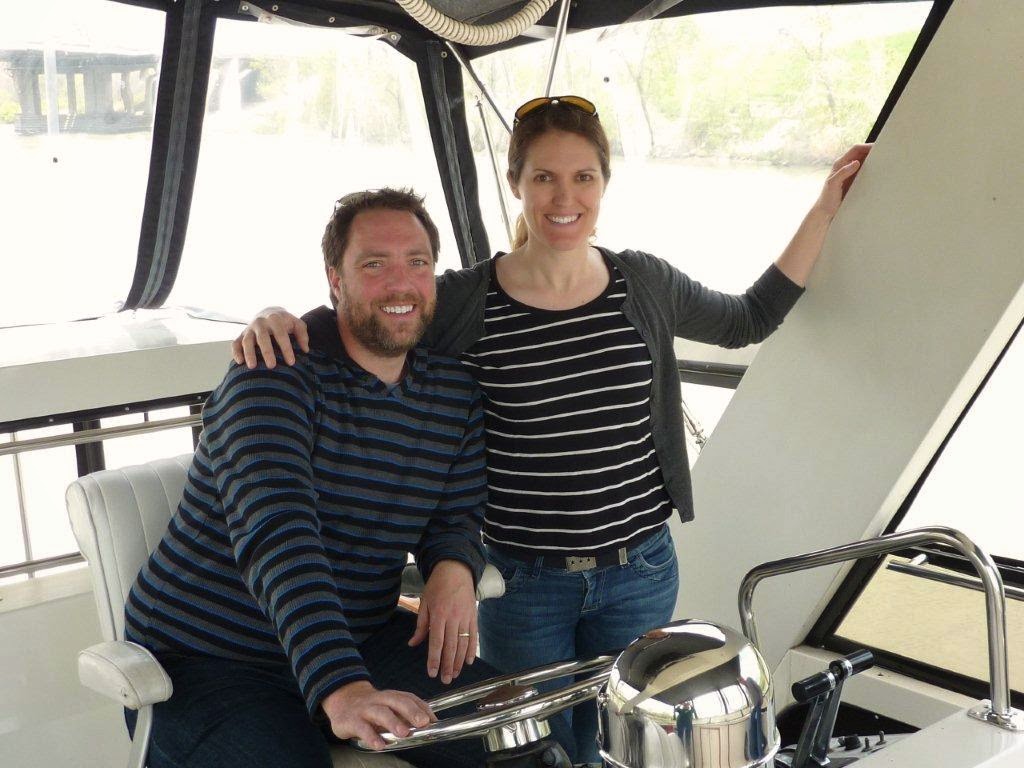 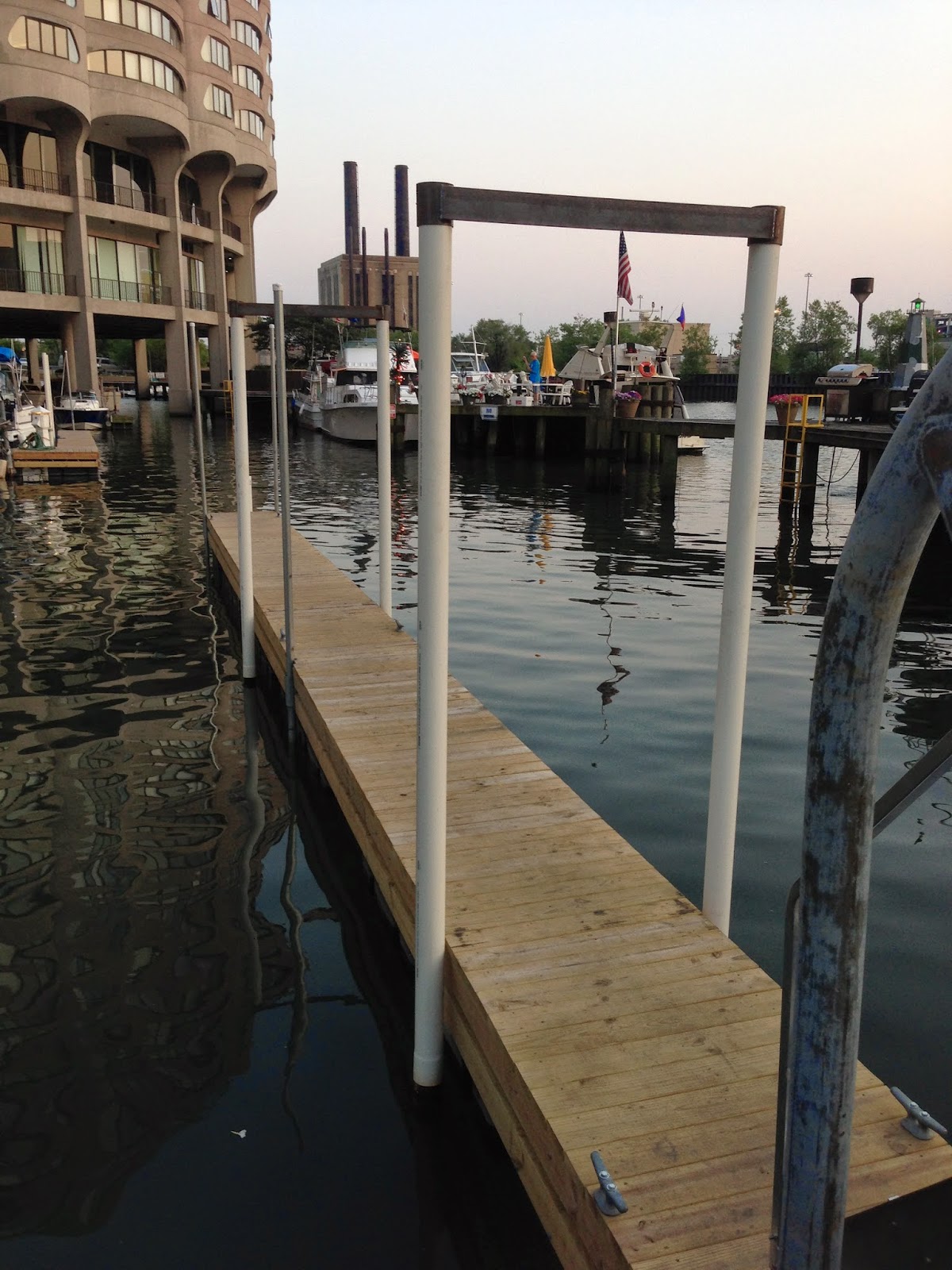 For loyal readers you might remember that the slip was incomplete when we first got to River City.  Well, now it's done.  They added these large and somewhat unsightly white posts with what we will call a "trellis" over the top.  These are supposed to keep the docks from moving out of position.  The cleats are not permanent, we have been told to use the white posts to tie to.  Unconventional, but we'll see how well they work.

You will also notice from the picture at the right that we still don't have a neighbor in the slip across the dock.  We will never complain about that, it's great having the dock to ourselves.  We are pretty conscientious about our stuff, we try not to take up more than 50% of our dock, and we don't have anything on it other than the ladder we need to get aboard.  It's very nice having the view without a big boat there.  The next slip over does have a pretty big Silverton flybridge, but it doesn't much block what view we have.


I'm sure many of you want to see the updates we've done, so here are some photos.  We don't have any furniture for the salon yet so it's a bit barren.  We have a chair that we'll pick up Saturday and a couch that will be delivered very soon too.  There is a new rug that will be laid down also.  That rug has been sitting in the Audi for three weeks, Colette has just been driving it around Chicago since we didn't have anyplace to put it. 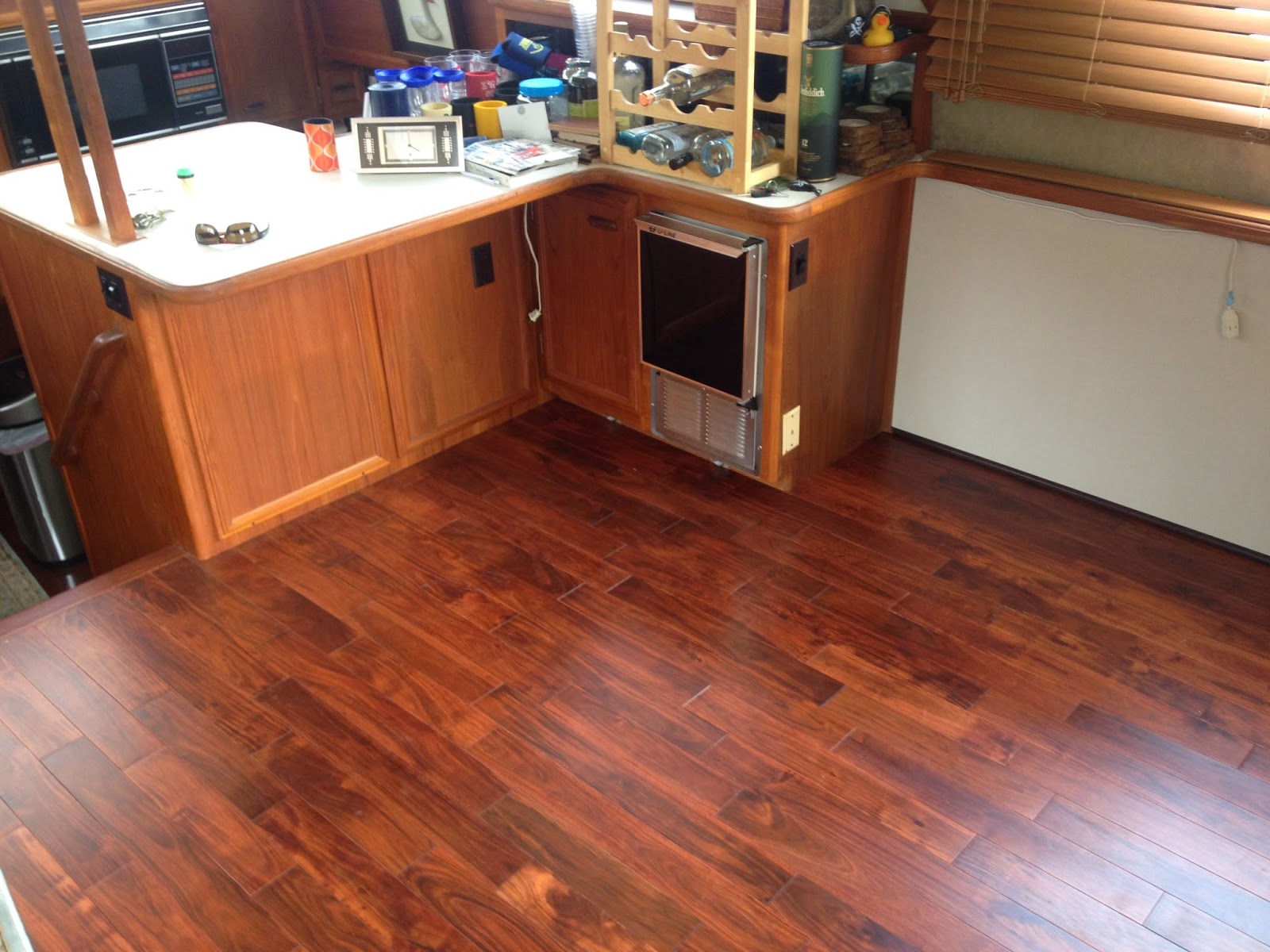 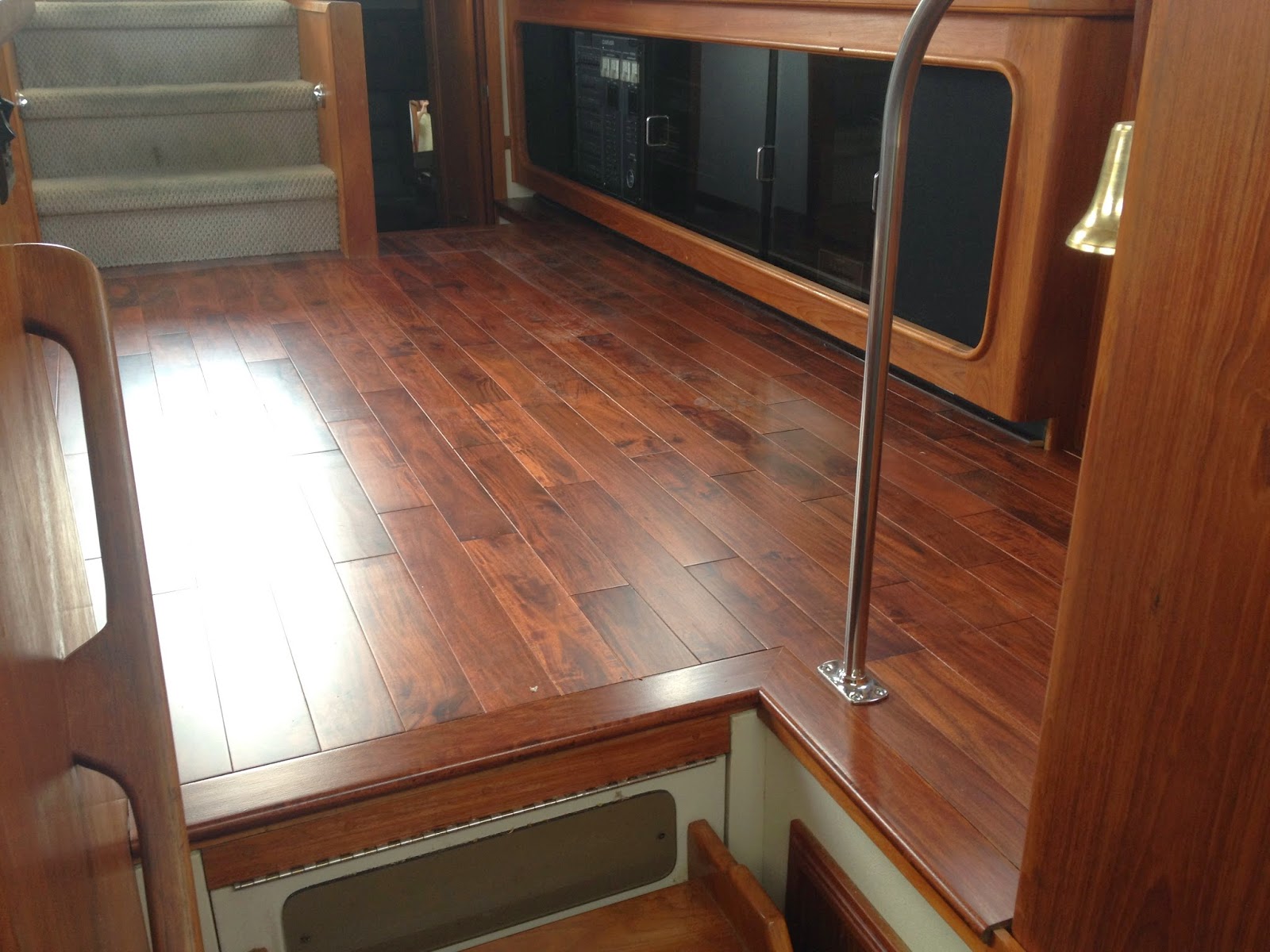 You are also looking at what could be the worlds most expensive swim platform.  Kevin feels like an idiot for this.  We knew it wouldn't be easy or cheap, nothing custom made for a boat could be.  But after all is said and done, we could have bought a pretty good used car for what this thing cost.  It does look quite nice though.  Those are solar lights built in to the trailing edge! 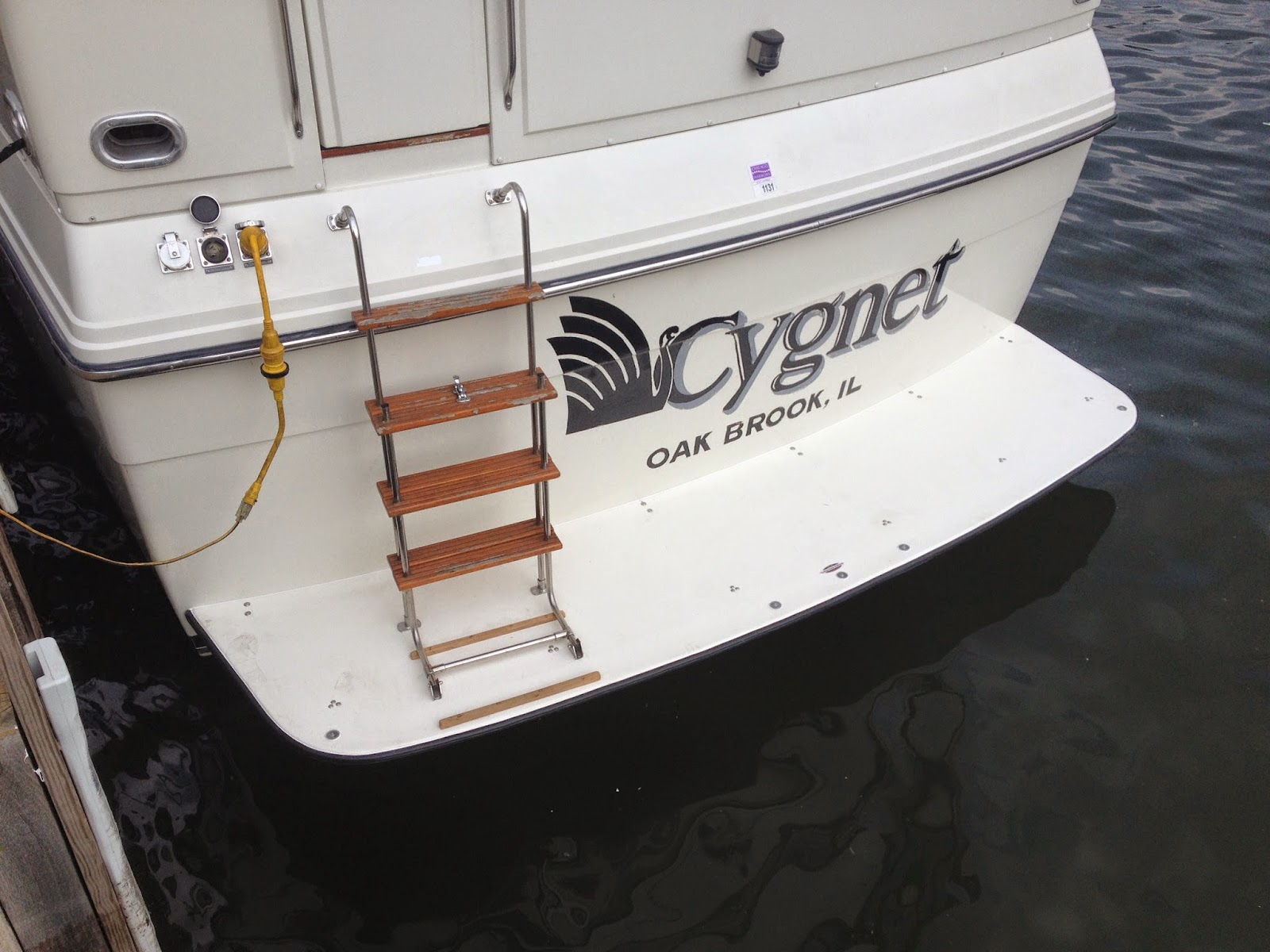 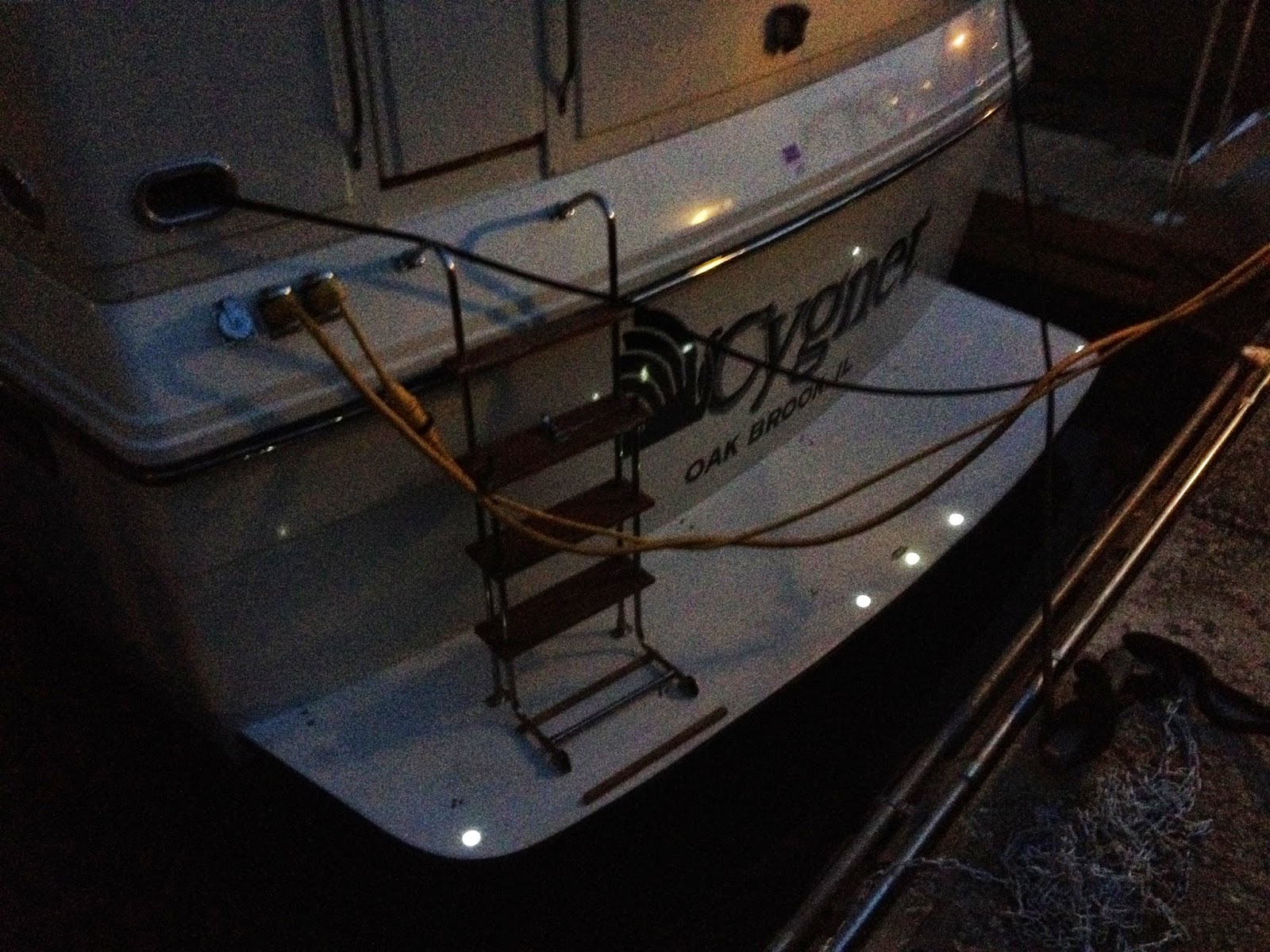 We would also like to say a special thank you to our very gracious hosts for the last three weeks.  After a few days with Rich and Liz we moved to Crash's place.  Matt (a.k.a. Crash) has been awesome and we've enjoyed the time with him.  He's tolerated us for almost three weeks, and never asked for rent.  Don't worry Crash, karma will take care of you, and so will we.  Now we look forward to a string of friends and family coming to visit us.  Bring it on folks!

So, water we thinking about our refreshed home?  It looks great and we are thrilled with the updates that we have done.  One of the mistakes we made with our house was accepting the condition.  There was so much to update that we didn't know where to begin.  We just lived in it with the cracking plaster and wood paneling for nearly six years.  We vowed we didn't want to do that with Cygnet and we aren't.