The Night was Moist...

The couple looked at each other with the same thing in mind, it was an unspoken bond they'd had for nearly nineteen years that had never faded.  It was something they each knew the other wanted, something palpable and real, that drove them to a higher level of ecstasy.  They were staring at each other, him walking slowly down the dock running his veined hands along the chrome strip that divided the yacht top and bottom, her above, a wry smile slowly produced by her pink lips.  In a moment the idea came, like a swallow chasing a dragonfly through the summer sunset, sudden and with vigorously excited movement.  It wasn't the inside of the big yacht they retreated to, with its soft Queen bed waiting like a smoke alarm to sense the heat.  It was the little one, the new one, the fresh meat they were after.

The pair readied the needed supplies; some alcohol, music, a protective sheath to hold the most valuable of the tools for the endeavor.  They laughed and talked of what was coming, a wet blast of hair twirling excitement they both relished.  They sank into the seats, still looking at each other, him taking her hand as she climbed on, her facing aft in her chair so she could keep her eyes on his shoulders as he started yanking.  He flipped a lever and without a noise the long shaft descended slowly into the wetness, they let out a giggle.  He wanted to choke it, something that was needed at times to get the machine working when cool, but since he'd already been playing with it before she came home the machine sprang to life with a roar and a shake.  The vibrations soothing the bottoms of the couple's seats.

He pulled out, able to deftly maneuver the machine through the tight passage to freedom.  Then before she was ready he thrust it forward, nearly knocking her over with the swift torque, but despite her surprise she liked it.  They progressed forward, looking to see if anyone was around, but they were alone, not a soul to see the fun they were having.  He had calmed down, slowly moving the machine through the gentle ripples while Ray Charles emanated from the speaker.  He asked her if it was ok to go faster, she nodded excitedly and braced herself for it, hands extending out to the sides grabbing whatever she could hold onto.  As they began to push quickly there was a ping, and another, and shortly after another.  Something began to feel odd.  The power the machine once had seemed to fade away a bit.  It still worked, but the force wasn't there, not like before.  She looked at him, a bit concerned, but he pressed on, twisting the grip a bit tighter and pouring on the go juice.  But it still wasn't right.

They had tried so hard, even going into uncharted territory to fix the machine's problem, but here it was again, that problem that had occurred previously after they had pushed it too hard.  Unless he was pushing the machine to its limit it faltered, chugging and in need of flogging.  He did everything that mattered, thinking only of her and how he didn't want to disappoint her again but it was of little use.  The machine just couldn't keep it going.  After it stopped doing its main purpose he stroked it mercilessly to try to get it back up and running, even squeezing the ball on the hose for more go juice, and that worked for a bit, but it stopped again,  just as she thought things were going to work.  He stroked it again, yanking on the cord like a madman while playing with the controls, a few sputters and then like a miracle the machine thrust forward and moved her.  As long as he kept a firm grasp on the grip he could make headway but it was when things inevitably needed to slow down that it again sputtered out.  With more stroking and fiddling he was able to get her home, but not the way she'd hoped.  She was still wanting, the timing wasn't right, she just wasn't satisfied with the machine's performance and he knew it.  They slowly climbed out, looking at the big boat ahead of them, this time they both ran their hands along the chrome strip as they walked the dock toward the opening.  This wasn't what either of them wanted but it was their reality.  They still had each other, they still had Cygnet, they still knew the little machine needed work.  He looked at her and shied away from her, knowing he hadn't done his job as a man, he had let her down and it was tearing him up inside.  But she knew in her heart he had tried and to her that was what really mattered.

So, water we thinking about our last time out on Chicago RIBber?  The motor seems to be starving for fuel and after our last trip she was pinging and losing power from what seemed like a lean fuel mixture.  There may be a clog in the fuel line or something wrong with the fuel pump, either of these things can cause a lean mixture and the symptoms we experienced.  Pumping the squeeze ball on the gas line seemed to help put a bit of pressure in and keep it running for a short while but as soon as that pressure subsided the motor would die out.  Kevin talked to a friend who is great with engines and they plan to take a look in the friend's shop this winter.  It's disappointing that we had to end the year of the Chicago RIBber this way.  If you aren't sick of dinghy stories we'll follow up again when we figure it out.  If you are sick of hearing about our failing friend we're sorry and promise to get back to more info about living aboard soon. 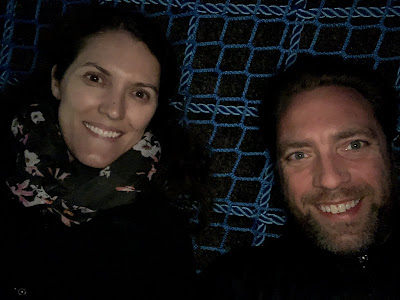 Bonus points to the first person to name the movie we stole the title of this post from.