Happy New Year! From on the water.

By Kevin Wright January 08, 2016
December 31, 2015 was the first time Chicago had any official New Years Eve event in our lifetimes. This year the city decided to host Chi-town Rising on the south branch of the Chicago River and we were not going to let this one pass by unnoticed.  Sure the name is kinda dumb, and they originally said it would be free to everyone and at the last minute decide $150 per person was better than free, but we decided we'd avoid all the hubbub and take Cygnet for a ride.

This year, knowing El Niño was coming, we decided to wrap the boat late and prep her for a cruise on New Years Eve.  So with 19 people aboard we fired up the generator and twin 454s and headed down river to the area between Michigan Ave. and Columbus where the event was centered.  We putted around a bit and finally talked to the CPD and CFD boats and found that as long as we stayed west of Michigan Ave. we could hang out and watch from there.  The event had a fireworks barge plopped right in the center of the river and we were not allowed too close.  We found a great spot to tie up on the north wall and were able to turn off the engines for the time we were there.  We did keep the generator running so the heater and lights we decorated Cygnet with would remain on.

We weren't the only ones either, our marina-mate Castaways joined us and Captain Pat kept her floating around the same area as us.  So there we were, two private boats, a fireworks barge, Chicago Police and Fire boats and 20,000 people all waiting for midnight.  We made some conversation with people on the riverwalk who wanted very much to come aboard and join us on Cygnet, they loved the idea of being on a boat in 20 degrees apparently.


At one minute until midnight the six pointed "Chicago Style" star that was hung from the Hyatt Regency began to ascend the building.  The star was not only lit up but was also a video screen (of course) and had the countdown shown on its face.  Despite the fact that the countdown was actually off by a little bit we had a great time at midnight with a fireworks display on the river near us and a larger one further east near the lake.

It was a great night, and we are glad we waited to wrap Cygnet so we could enjoy the party!  Six days later, Cygnet has been wrapped and is ready for winter.  We're supposed to have lows in the teens next week, although that's still mild for this time of year.  Last year Lake Michigan was already freezing over at this point.  We debated not wrapping at all this year, since we have experienced a very mild winter thanks to El Niño but decided that wrapping was the best plan.   You never know what's coming.  So Water We Thinking about the celebration and living aboard our second winter? So far so great! 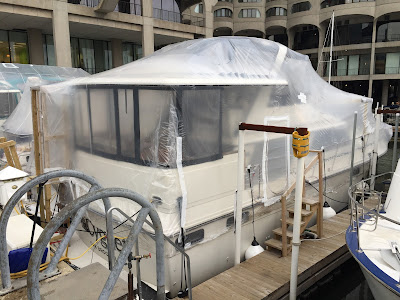