By Kevin Wright February 06, 2015
First we must apologize for not blogging in a little while, we've both been relatively busy with work (Colette especially) and just plain lazy about writing.

On January 17 we spent four hours working the River City booth at the Boat Show.  We did the 10-2 shift which gave us some time afterward to explore the show with our good friends Adam and Holly and their lovely daughter Claire.  In the beginning it was a bit slow, but quickly it filled up and we grabbed people walking through to talk about River City.  Now, let me say that River City isn't perfect, it has some problems here and there, but overall we really like it.  Mostly we like the location and the fact that you can liveaboard year round.  So we put on our happy faces and told people about our "neighborhood." 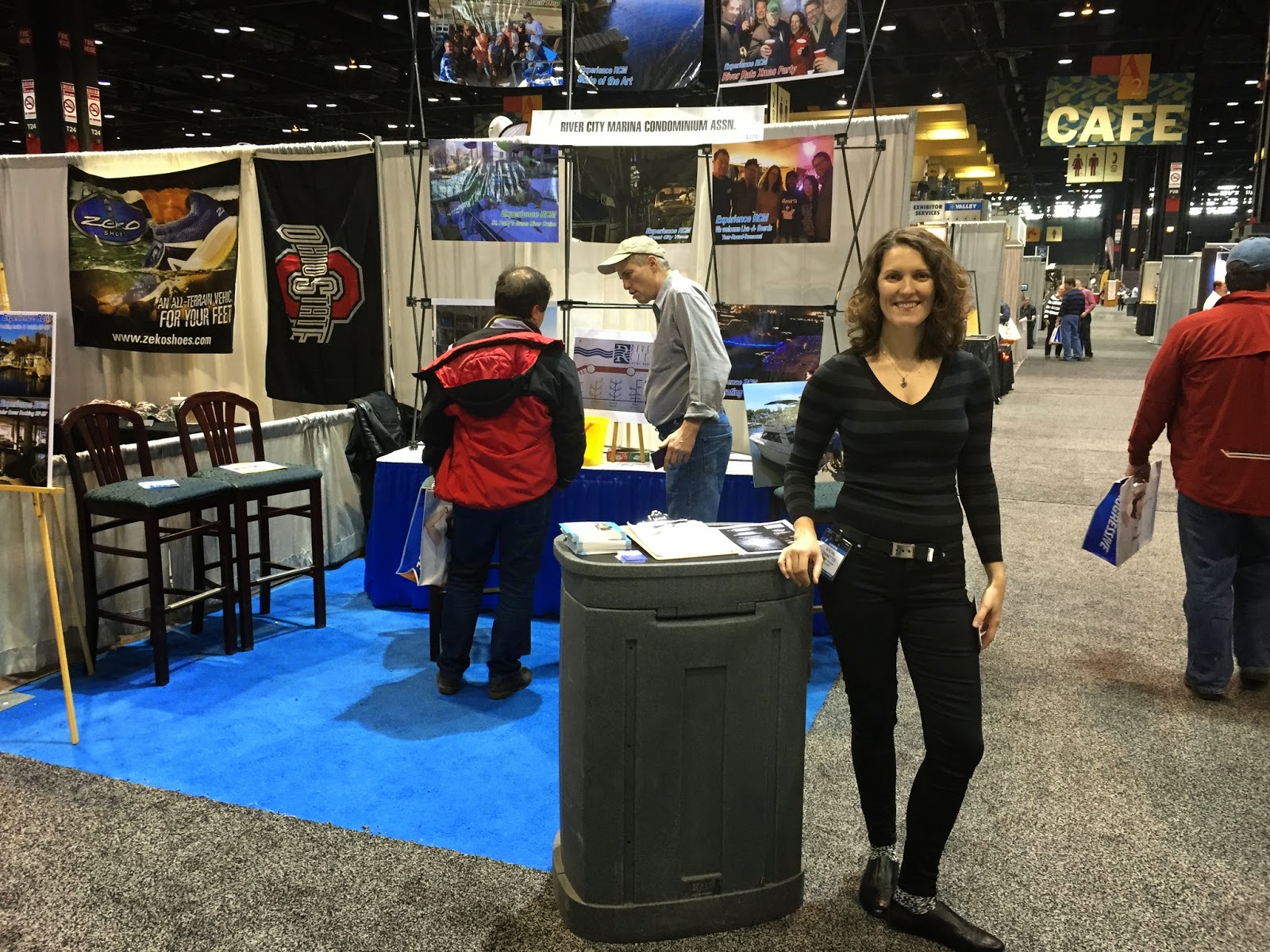 If you were one of the people that stopped by I hope you gained some great information from us and learned more about the marina, if you didn't make it that's too bad because we had a great time talking to a lot of interesting people.  Of course many people knew about the WGN story and spoke to us about that, in fact after we left on Saturday and during the show Sunday there were people asking about us who wanted to meet us.  We are around celebrities all the time since we both have worked in the film and TV industry for years, but it's strange being the one people recognize.  At least by some people.  One of the things we found hilarious was the fact that people DIDN'T know who we were.  We had a lot of people talk to us about River City and the WGN piece but not realize they were talking to us!  Multiple times you could see the gears turning as we told them, they were blown away when the realization hit.  Here is how it went:

Kevin: "So do you know about River City?"
Nice Guy: "Yeah, I just saw a thing on WGN about some people that live aboard year round there."
Kevin: "Really, so you thought that was crazy or cool?"
Nice Guy: "I thought is was great but my wife (points to wife next to him) thinks those people are nuts."
Kevin: "You know I'm that guy, right?"
Nice Guy: (pause) "OH, WOW! Yeah, you're the guy from the thing! Hey Honey, it's the guy from the thing we saw on WGN (shakes my hand)"

And so it went many times that day.

We saw a lot of interesting things at the show but nothing that blew our hair back.  We looked at some interesting boats but there were not many at the show that we were at all interested in.  If you want a pontoon or a "bro" ski boat this is the show for you.  This show, which merged with the Strictly Sail show this year, is mostly geared to people on small lakes or people who trailer to the Fox river and chain of lakes.  There were a couple boats over 38 feet, but the lines were so long to see them it wasn't worth it.

One thing we'll say is that despite many of the boats looking very flashy and fancy many of them are kinda junky.  We looked at a few that were definitely built to wow with shiny things all over, but not really built to work well as a great boat.  Once you get into the holds and lockers and look behind the curtains you can see the build quality is not spectacular - even on Chicago's favorite brand Sea Ray. Granted we owned a Sea Ray and loved it, but it was built in another time by people that wanted it to last forever (it almost did), not by a marketing driven economy.

We also looked at RVs, which are getting ridiculously expensive and ridiculously cool.  We've always thought about driving around the world in a small Sprinter based RV but at $120,000 for a glorified van that seems a bit crazy.  When you have 5th wheel trailers that are bigger than most people's houses with four double slide-outs, a fireplace, and a TV and kitchen both inside and outside it gets a little much.  Still, they are cool to see.  I just feel bad for the children that can't see the outside TV because the campfire smoke is in the way.

We're still doing well!  It's been a somewhat mild Chicago winter so we are handling it just fine. We've had sunny days that warm the boat up to 77 degrees and frigid nights that cool it off to 61.  We added another heater on it's own circuit by running an heavy duty cord in through a window but it's still tough to keep the heat in when the wind is blowing.  On calm nights in the 20s it's absolutely fine, but a breezy night means we sleep deeply under the flannel sheets and down comforter.

We got piled on with a bunch of snow, about the same amount as part of the East Coast had the week before and we handled it without issue.  We slap the underside of the wrap to keep too much snow from accumulating on top and to keep it open for the sunshine to warm us up.

So water we thinking about our experience at the show and with the cold?  We enjoyed the show and met some great people.  Boating attracts people that are a bit different, and we like that!  It's fun talking to people that are true characters.  The cold is fine, we cope, but we are ready for spring! 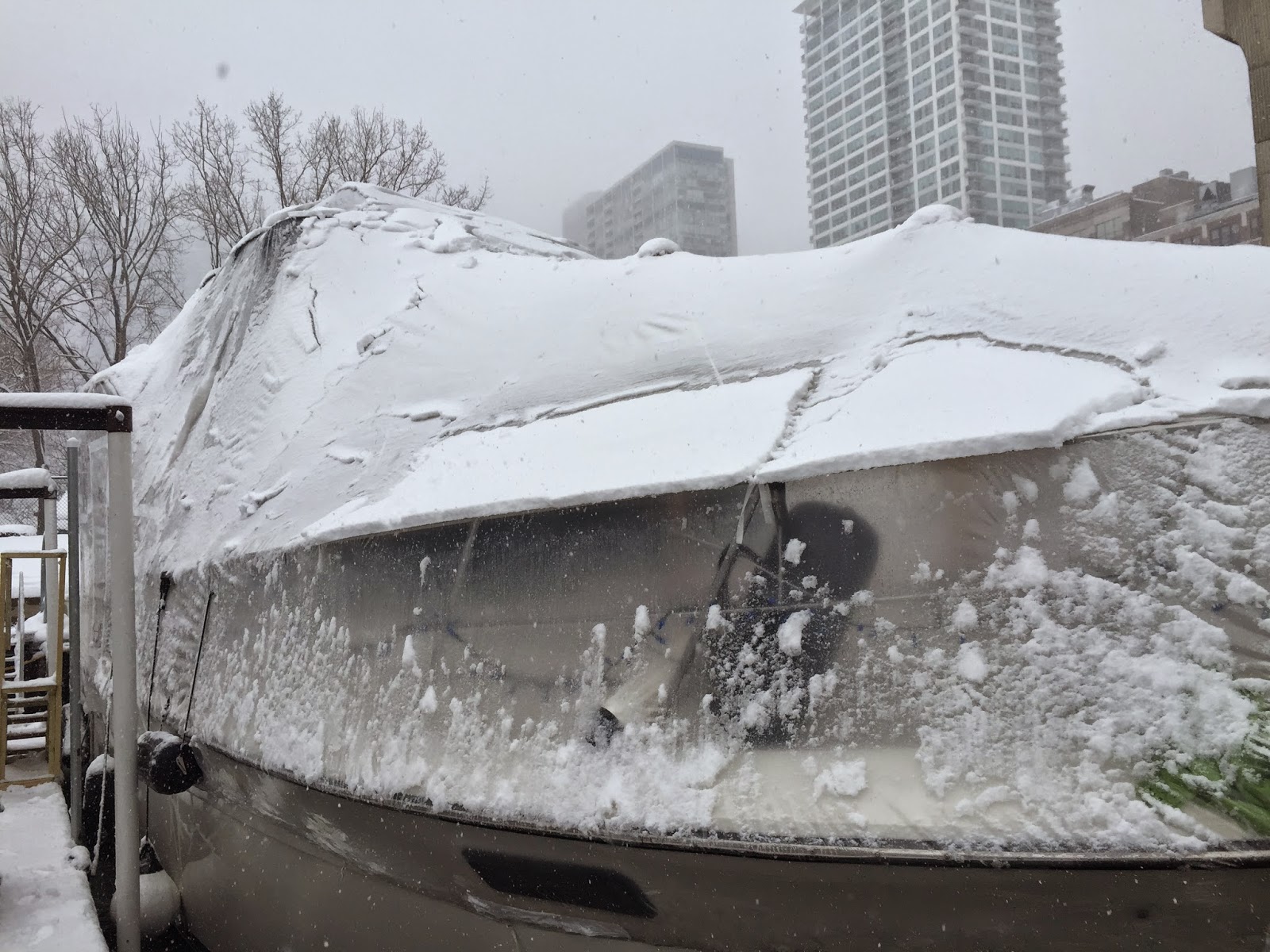