A December boat party? Induction into the River Rat Society!

By Kevin Wright January 06, 2015
Now into our first winter living aboard we were invited to the annual River City Marina Rat Party. Every year in the beginning of December those of us brave or dumb enough to have a boat in the water through the winter (and some of the summer folks) are invited to a party in the marina to celebrate our curious way of life.  The party is more of a boat "crawl" where we start on one boat and visit all the others with a finish on the largest of the winter dwellings owned by Dr. Doug.  This year we had a great turnout, we invited a few non-boating friends to join and everyone had a great time. 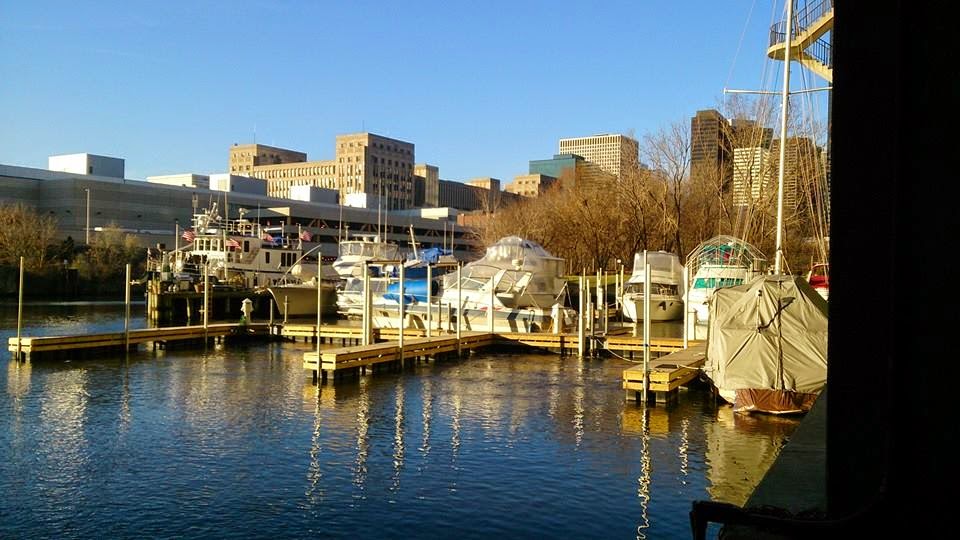 The evening started with a cocktail aboard Cygnet as our friends arrived, then we en-masse went to Castaways, owned by Captain Pat to join the rest of the crews.  On a calm and relatively mild early December evening it was packed.  Castaways is no little runabout, it's a big boat, about the same size as Cygnet, but it was packed to the gills with our neighbors and their friends.  It was almost hard to get through the crowd, but a quick handshake or hello was all you needed to access any part of the ship.  There was a large spread of sandwiches and snacks and everyone was carousing away.
Next we moved on to Tim and Laura's new digs.  Tim is a handy guy and has done some great work on his boat to make it comfortable.  Probably the best addition, at least for a party, is the shot dispenser.  He has a little machine built into the back of the boat that dispenses a shot of nearly any liquor, whiskey, tequila, rum, whatever you like.  It was a huge hit.  Fifteen minutes later we were off to Cygnet.
Whenever you do a bar crawl, if you've ever done one, you know you don't spend much time inside each establishment.  So we headed to Cygnet, for our 15 minute hosting session.  We had new people that have never seen inside her and we're happy to give the tour.  It's very nice when you bring people aboard and they love what you have.  We often get many compliments on the way we've decorated and redone the interior.  We love it, and it seems others really do too.  Even when we had our house we didn't feel the same since a lot of it still needed to be redone, the furniture wasn't all our choosing, much of it was bought second hand or handed down.  On Cygnet we have changed a lot to make it ours, and people seem to respond to it.
After a brief time we ended on Dr Doug's boat, or more reasonably "barge."  This vessel is unlike any others in the marina, it's most like a floating home, you can see a bit of it in the three photos above. First, it's made of steel and iron as opposed to wood and fiberglass like the others.  It's also a true two story boat, there is a second floor and even a third floor rooftop patio.  You have to see it to believe it, and that's exactly what we all did.  The entire party ended up aboard where we had the induction ceremony.  Tim was elected as President of the River Rat Society, the rest of us newbies were simply inducted.  We now are part of a fraternity of silly people who think they're too good for land.  We even got the hats to prove it.