Power Hungry and All Wet.

By Kevin Wright September 04, 2014
A few weeks ago we were sitting on the aft deck on a Friday night, enjoying a lovely evening, and suddenly the power went out.  We looked around and saw that it was just our boat.  Kevin did some investigation and found the cord that brings power to the boat, called "shore power" was not right.  It had melted the plug on to the socket attached to the boat.  It was a bitch getting it off, but once it came, Kevin found it to be messy.  One of the metal contacts on the socket was loose, and the plug was quite knackered.  Is it our boat that has a problem, the cord, or maybe the pedestal on the dock where we plug in?  We didn't know and there we were without power.  Well, that's not quite true, see we have a fancy Kohler generator, we just fired that thing up and all was well.  The generator runs the systems of the boat when you aren't plugged in, the refrigerator, water heater (which can also run off engine heat when underway), stove, microwave, ice-maker, etc.   Of course we don't run it when we aren't around, or at night, so the refrigerator and hot water heater have to keep themselves cold/hot overnight and through the day when we're at work. 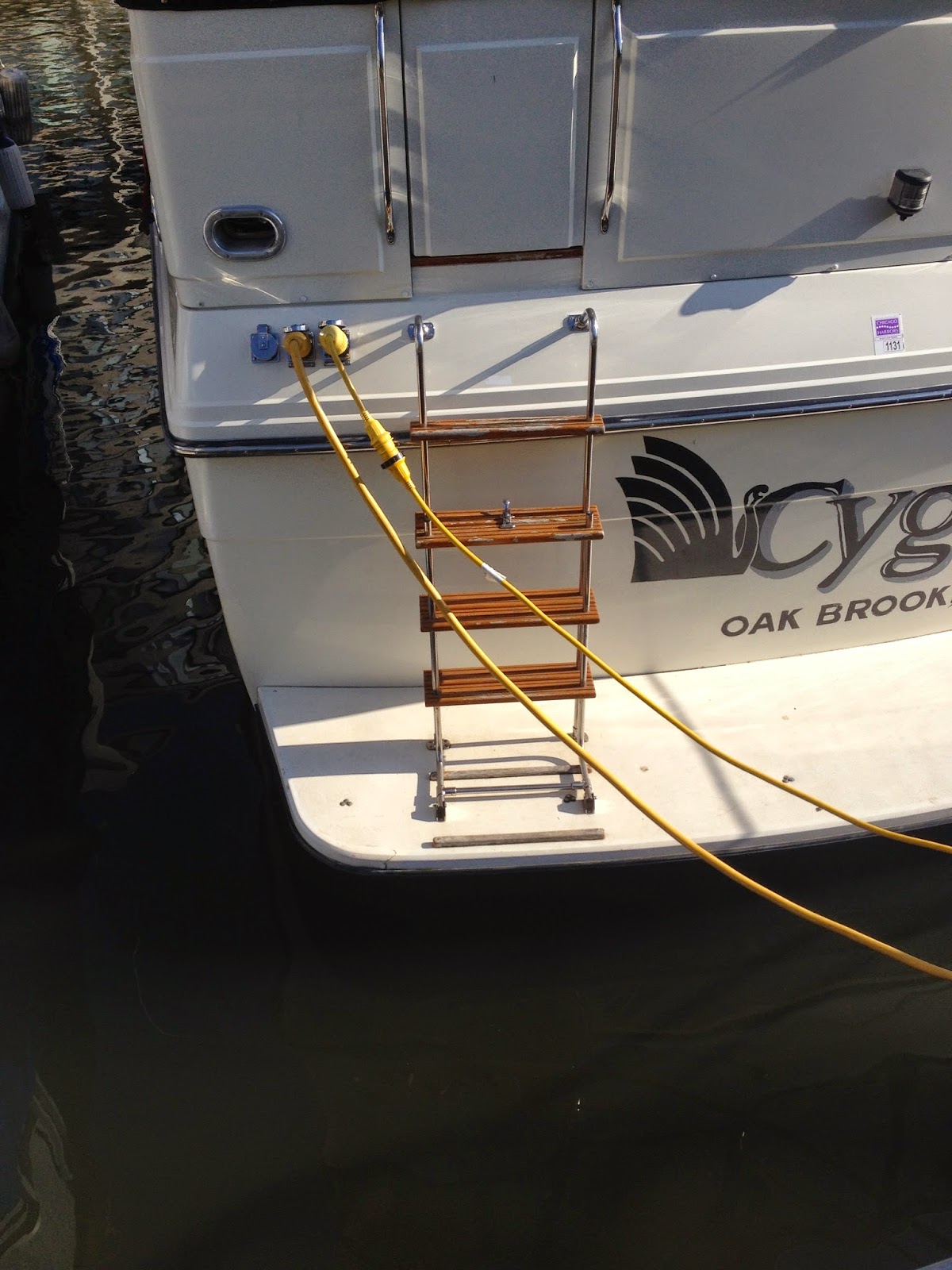 If you have a power outage in your home you call the emergency service to come out, boats are not really like that.  We waited from Friday night until Monday morning since no service facility was open.  On Monday parts were ordered and they arrived Friday and were installed.  We went one week with no shore power.  What we did have however is A/C since they are separate inputs.  When running the generator we could watch TV, charge our phones, etc. but the entire time we could crank the A/C to ice cold and sit wearing sweaters if we wanted.  The fix wasn't cheap, but not ridiculously expensive either.  It's been three weeks since it was fixed and all is well.

Last night it was the water.  Kevin noticed a small leak in a T fitting on one of the water lines. Access to the line is ridiculously difficult (Damn you Carver engineers!) and he couldn't reach to fix it. Colette to the rescue, she was able to slide her lanky body far enough in to put some plumber's epoxy over the leak.  We waited 30 minutes for it to cure and found it hadn't worked.  We put more on, waited 30 minutes, and nope, still leaking.  Tonight we'll try again. 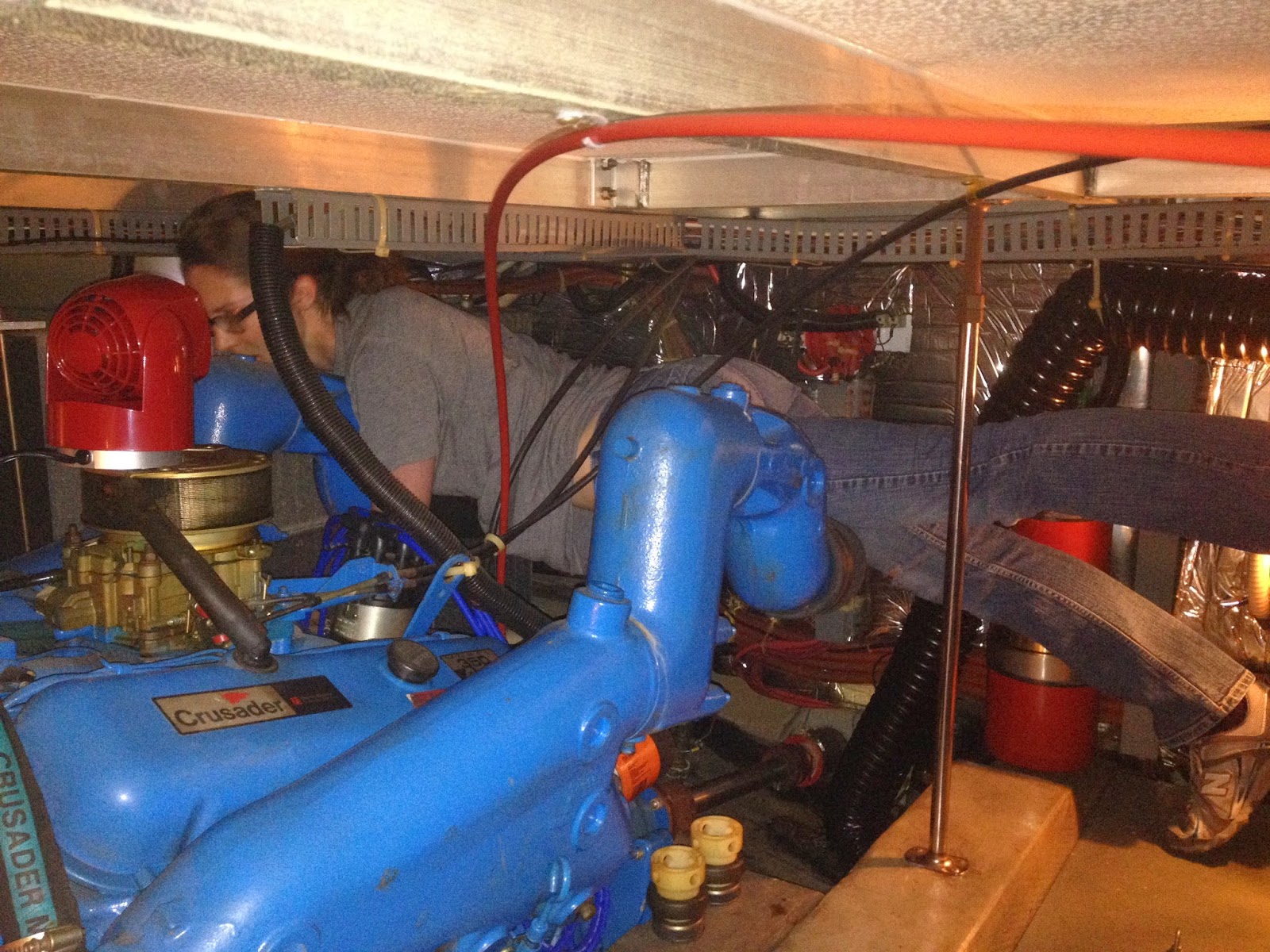 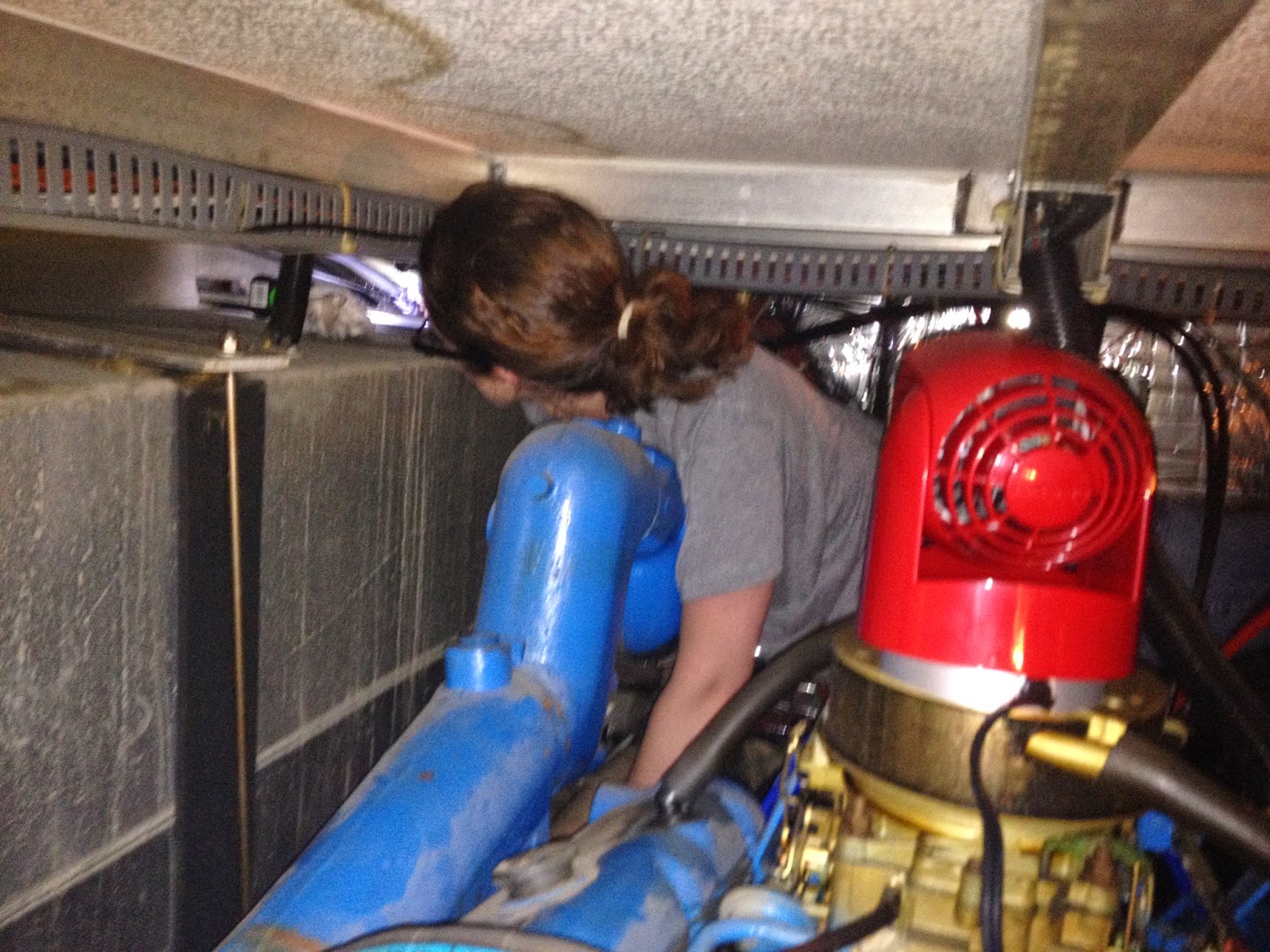 Other than the irritations with getting things fixed and small jobs often being much harder than they should be we are starting to experience the downsides of living aboard.  Space is always an issue, but one we manage well.  When we bought furniture we needed to make sure it not only fit in the space, but that it could fit through the door.  Your front door at home is probably three feet wide and it's tough to get furniture in and out, ours is two feet wide.  Bulky objects can be a challenge.


We also have what Kevin considers the equivalent of the barking dog.  At our house we didn't have a dog next door for many years.  When our neighbors did get one he was well behaved, after his adolescence, and didn't bark much.  We have no dogs of any kind at the marina, just the dogs from the building getting walked in the lot next door, which make little or no noise.  What we do have are asshole boaters.  The Chicago River is full of boats during the day, from huge gravel barges, to tour boats, to private vessels of all sizes.  Most of these are polite, some are not.  The tour boats never cause much of a problem, we get to hear the same sections of the tour with every boat that floats by, the Chicago Fire, Bertram Goldberg, Willis Tower, etc but it's not bad.

Most private boats are very respectful of the NO WAKE signs on the river and go slow.  Some don't, and when we see them and ask them to slow down they won't.  They are scum of the earth, the types of people that want to do 12 miles per hour past our marina instead of 8 even when they know their wakes could damage every boat in the marina, knock someone off a dock, and cause general discomfort for everyone.  There are a lot of these people and it's sad that they would treat other boaters this way.  The barges are fine in the daytime, they go slow and take care.  At night, when the waters are clear and people are sleeping, it's a different story.  We wake up often with our boat rocking and rolling from the wakes of these behemoths in the middle of the night.  The boat slams into the piers, rocks back and forth, doors swing open and closed, objects fall.  It keeps Kevin awake at night, he worries about Cygnet.


Not quite slow enough


So Water We Thinking about our issues?  Well another boat in our marina is named "99 Problems" and our numbers aren't that far away.  This may seem like a pessimistic post but we are still loving the life.  It's the little things that you don't think of that can drive you crazy or make you love it more. Right now the positives are strongly outweighing the negatives.