By Kevin Wright July 11, 2014
First of all we are sorry for slacking off and not posting in a couple weeks but we have a really good excuse.  We spent 13 days in Northern Europe on a vacation/ fact finding mission!  It was tough work being in Europe in the summertime, but somebody has to sacrifice themselves for the greater good.

We've mentioned before that it's common in other cities for people to live aboard some sort of vessel, and Amsterdam might just be the capital of these live aboard cities.  We flew to Amsterdam and instead of spending a couple days in a silly hotel, we opted to spend our time on the water.  In Amsterdam you can choose from a wide variety of places to stay, from fancy hotels to an Airbnb apartment.  The place we chose was called Volle Maan, or Full Moon in English. 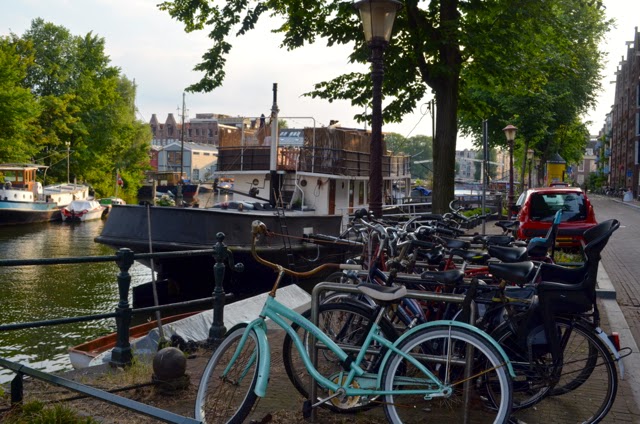 It's run by a lovely couple about the same age as us who have a super cute little girl who is friendly and loves to explore.  They live in the forward part of the boat and rent out the aft "apartment" for visitors like us.  Yes, there is a baby that lives on the boat, in case you missed that.  Some of the folks we've talked to about living aboard say "I'd love to do that, but I have children so..." but guess what?  People raise kids on boats!  We think that's awesome.  The location of Volle Maan is straight across the canal from a petite park and daycare, both are accessed easily by a darling old manual drawbridge and are about a 45 second walk away.  While we were in Amsterdam we explored the city and took a very large number of pictures, mostly of boats and canals, as well as some video of the scenic charms of the waterways. 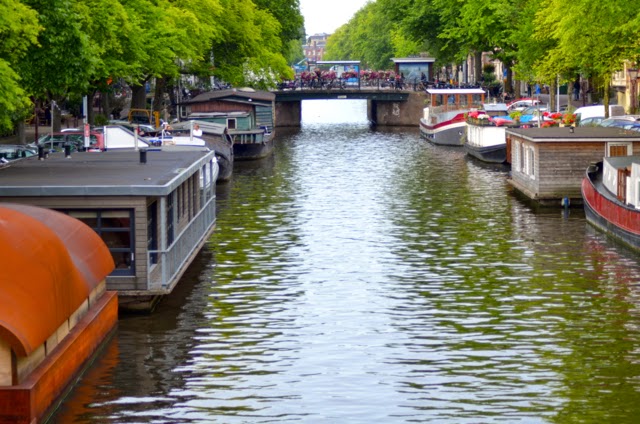 We didn't spend too much time on the boat since we wanted to explore, but the times we did spend were great.  After shopping one day we walked back to drop some things and sat on deck with a cup of tea and watched the people rowing or motoring by with huge smiles on their faces. 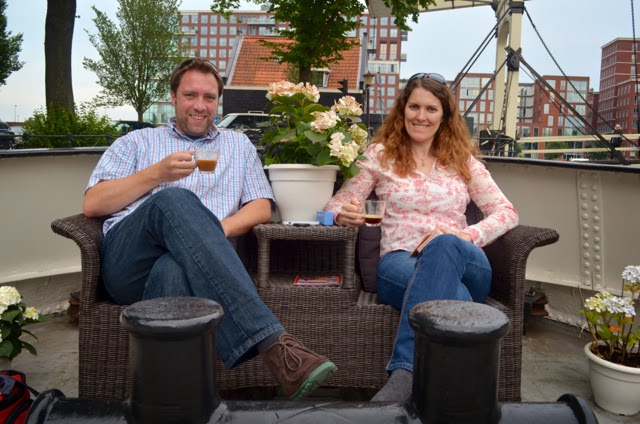 Each morning we were greeted by a basket of breakfast with eggs, excellent croissants, meats, cheese, and more.  There was too much to eat, and it was all excellent.  You can tell the owners care greatly for the comfort of their guests.  This boat is quite different than ours, it's a converted ship for carrying goods.  The conversion was a great one, as the interior was clean and bright and very comfy, as you can see.  It's steel and iron and only moves once every few years to get a new paint job on it's hull.  If you are ever in Amsterdam, this is the place to stay.

Later that week, while in Copenhagen we walked around and experienced a beautiful city.  We toured Christiania where Colette declared to be the place she would have wanted to live when she was 12.  It's a Freetown in the middle of another city.  It's unique, it's artistic, it's dirty, it's wonderful and it's full of tourists.  One nice resident called us either tourists or terrorists, Colette thinks the former and Kevin is certain of the latter. 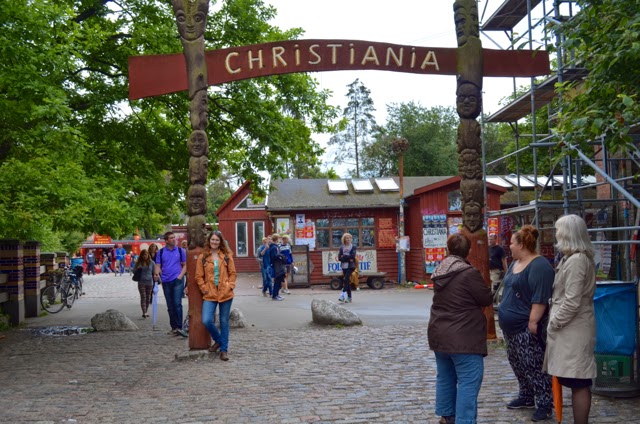 After a walk around we decided to return to a restaurant we saw on the walk up.  This restaurant happens to be on a barge moored in one of the canals and serves excellent food and drinks.  While there and under the cover of a tarp the rain began to fall.  There are many tour boats that take you around the canals, some are open to the sky, some have glass enclosures. 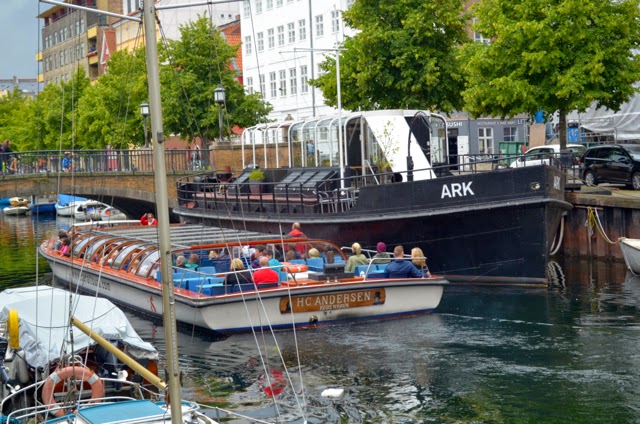 As the rain began falling we watched it splash off the canal until it was what could only be considered a downpour.  Seeing the people on land scramble for shelter and rush as if they were melting was fun, but as the open tour boats started coming by you could see only one thing in the face of these trapped and soaked people; joy.  They were having so much fun!  To be on a tour in the canal and be poured upon sounds terrible, but every one of the people we saw had a huge smile on their face.  These are the experiences that you go home and tell your friends about, the ones you talk about for years.  "Remember that time we got soaked on that tour boat in Copenhagen?  That was awesome!" 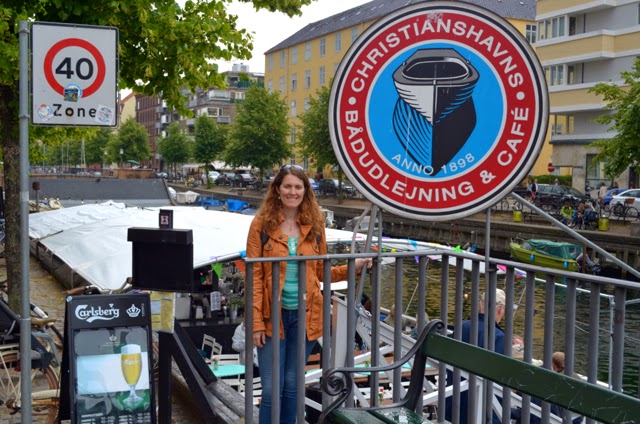 Throughout the trip we spent some time on the water.  In Norway we had a superb day out on our great friend Tommy's little runabout.  It's only 19 feet but handles the waters around Oslo with no problem, and actually goes quite fast with a 100 horsepower outboard motor.  When visiting cities with water, like Oslo, Amsterdam, or Chicago we feel that getting out on that water is one of the best ways to see the city.  We were thrilled to see Oslo from a point of view that few tourists get.  Thanks to Tommy for the great day out. 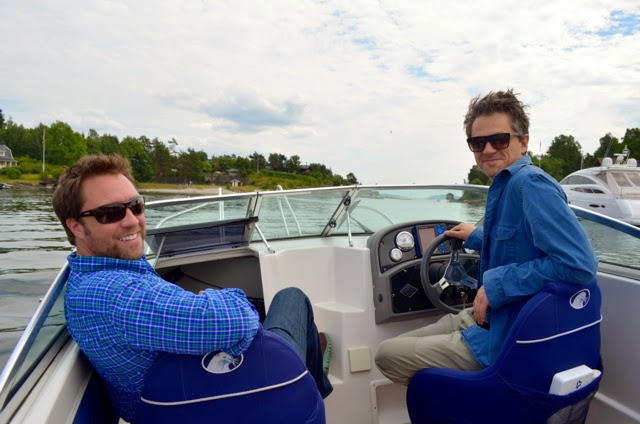 Speaking of Oslo and boats, we took another ride while there.  This time on something a bit larger.  We knew we needed to get to Dusseldorf Germany and had planned to drive there as we'd just done the reverse trip to reach Oslo the week before.  After researching we decided to take the ferry from Oslo to Frederikshavn Denmark to split the trip up.  So at 7PM we boarded with our trusty Skoda rental car and found the ferry to be quite fun.  After loading the cars in like sardines, you are free to wander about and enjoy the buffet, cafe, spa, multiple bars, live music, duty free shop, disco, and casino. Or you can just watch the world go by on one of the many outdoor decks. 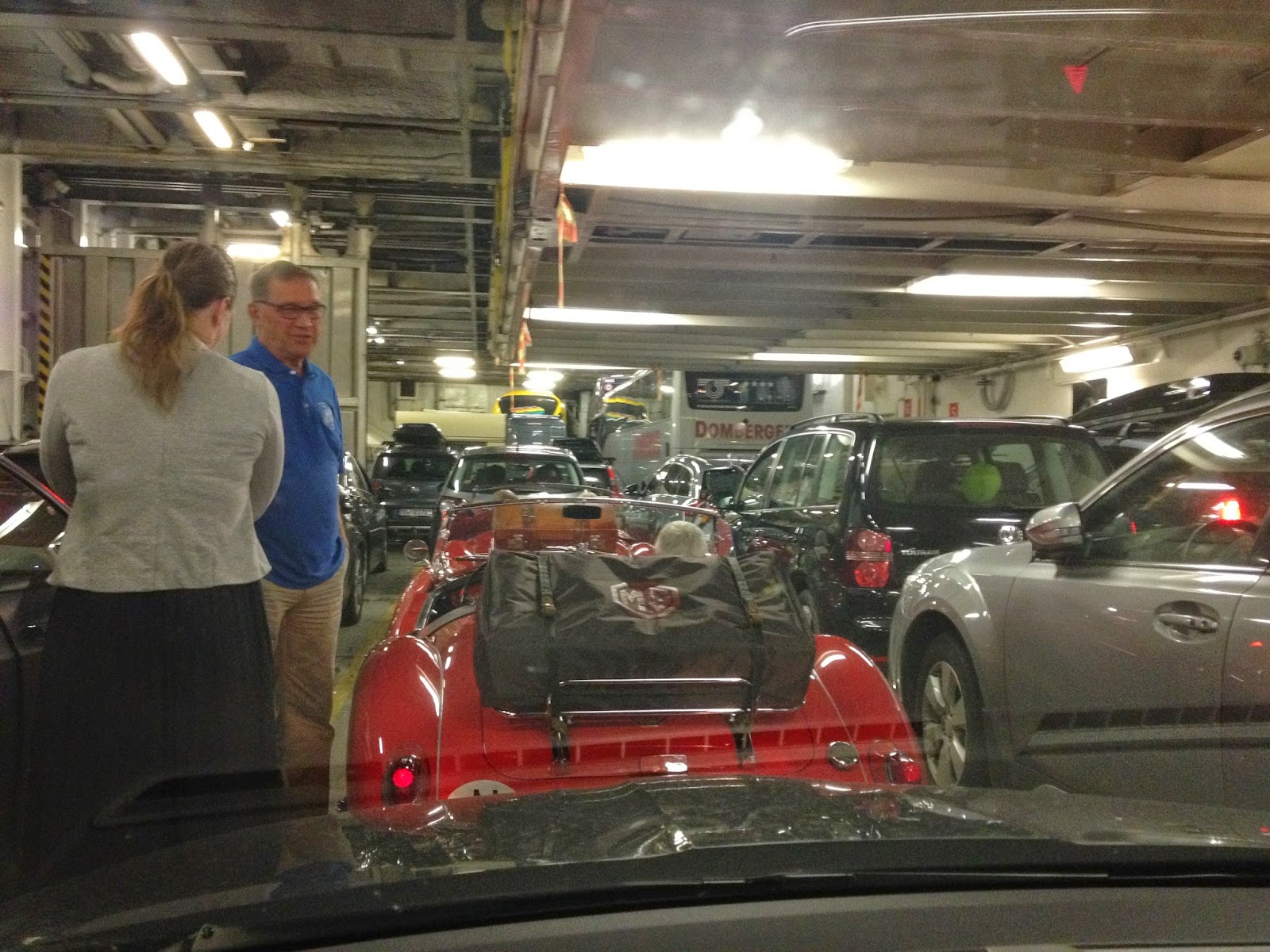 We had a small interior cabin which was fine with us.  After spending nearly two weeks in northern Europe and experiencing a sky that never gets dark in the summer we were happy to have a windowless room.  At 7AM the next day we arrived in Denmark, rested and ready to make the 900 kilometer drive to Germany.  Sleeping on a moving ship is fine, there is slight movement from the water but it's barely noticeable.  The minor vibration from the motor is about the only thing that could be considered bothersome but some might find it soothing.


Like Ships in the Day
The moral here is that water, beside being something essential for the body, is a great thing for the soul.  Some of the best moments we had on our trip involved water and boats.  Will we remember the meal we had stopped on the German Autobahn Gas station?  Probably not, but we will remember the meal we had aboard the ferry as it sailed to Denmark.  So water we thinking about our decision to live aboard?  We spent 13 days away from our boat and a lot of what we did on our vacation revolved around other boats.  Do you think we like boats?